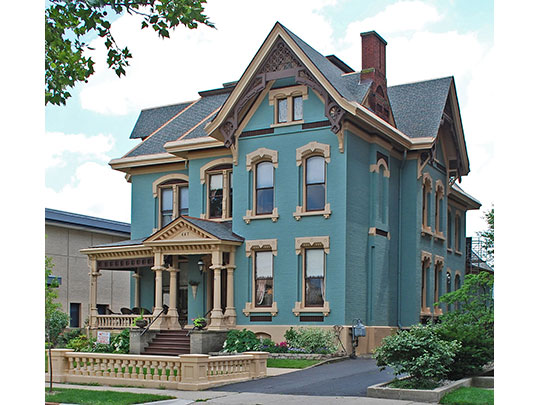 Kalamazoo sits on the Kalamazoo River, about midway between Chicago and Detroit.

Kalamazoo, whose name is derived from an Indian word referring to what is now called the Kalamazoo River, was, until just before the time of its settlement by whites, a part of a Potawatomi Indian reservation established in 1821 when, by the Treaty of Chicago, the Indians ceded control of much of southern Michigan to the United States government. A trading post existed here in the 1820s and until 1837; another may have existed as far back as the 1790s.

The white settlement of southern Michigan began in earnest in the 1820s and the migration from the east increased rapidly after the Erie Canal opened in 1825. In 1827 the federal government had the land surveyed in preparation for sale. In 1820 Titus Bronson, a native of Connecticut, visited the site of Kalamazoo and in the Spring of 1831 he and a brother-in-law, Stephen Richardson, purchased from the government the area included in what is now downtown Kalamazoo. They platted their purchase as the village of Bronson.

The Legislative Council of Michigan Territory established Kalamazoo County in October, 1829 and Arcadia Township in 1830; both the Village of Bronson and Arcadia Township were renamed Kalamazoo in 1836. The county seat was located on Bronson's land in 1831. The location of the place along the route of the Territorial Road from Detroit to St. Joseph Michigan, and at the intersection of various trails, guided the choice.

It can be said that in its physical appearance Kalamazoo combines both metropolitan and small-town characteristics. Kalamazoo is a culturally active town; the home of four colleges (including a large State University) an art institute, and a symphony orchestra. At the same time the town has managed to maintain the physical look of a much smaller place. Its streets are often narrow and lined with shade trees. The attractive downtown contains a public square which is surrounded by churches and public buildings. The buildings of the central business district, with few exceptions, are small in scale, generally only three stories in height. Kalamazoo is not a city of concrete and steel.

Kalamazoo can be divided into its downtown district, an area of inner-city neighborhoods which encircle it, and another region of suburbs which are situated on the city's surrounding hills. Industrial concerns are located both within the downtown and further out of town, especially to the northeast, east and south.

Paper-making began in Kalamazoo in 1866 with the establishment of the Kalamazoo Paper Company plant on Portage Creek, southeast of town. In 1895 Bryant Paper Company built a plant in the same part of town and early in the 20th century a number of other firms which manufactured paper or paper goods were established. Paper was a leading industry in Kalamazoo until the 1960s.

One other firm which has put Kalamazoo on the map over the years is the Upjohn Company, manufacturers of pharmaceuticals. The firm was established in 1885 by Dr. William E. Upjohn and several brothers after Dr. Upjohn developed a new, softer type of pill called the "friable pill" which could be absorbed more easily by the human body. The company grew rapidly in the early 20th century and is still located in Kalamazoo.