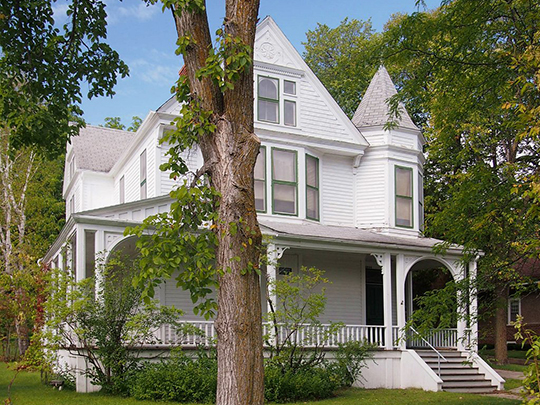 Colonel George Johnston, the founder of Detroit Lakes, selected the area in 1871 for settlement. He built a flour mill on the Pelican River, and as the Northern Pacific Railroad was constructed through Becker County, the city quickly grew.

As the population of Becker County grew, it became necessary to choose a county seat. There was considerable controversy over the matter. Detroit, Frazee, Audubon, and Lake Park each felt they were the most desirable location. During 1874 and 1875, the County Commissioners used Lake Park as their meeting place due to the fact that the County Auditor owned a store and had his office in Lake Park, and all of the Commissioners lived west of Detroit. In August 1875, the Becker County Commissioners resolved to obtain offices in Detroit. The matter was finally decided at an election in the fall of 1877 and resulted in a victory for Detroit by about a ninety percent majority, which settled the county seat contest.

In 1881, the village was incorporated and named Detroit — which is French for strait. By 1884 businesses in Detroit included the elegant Hotel Minnesota, and Lakes Hotel, a bank, a newspaper, and an opera house. Also in 1884, the foundation for the first Courthouse was laid. The first major industry was the Fargo-Detroit Ice Company which bottled and sold pure spring water. In 1885, the village hall was built which housed the County Fire Department. In 1926, Detroit was renamed Detroit Lakes to eliminate postal mix-ups with another city named Detroit, Michigan.

In 1941 a State Fire Marshall described the Courthouse as a very serious fire hazard and a menace to public safety. In a short time, the Courthouse was sold to Gopher Lumber and Wrecking Company of St. Cloud for $531.00. On September 18, 1941, there was a ground breaking ceremony for the present Courthouse, built by the WPA. Additions and changes have since been made to many parts of the Courthouse.