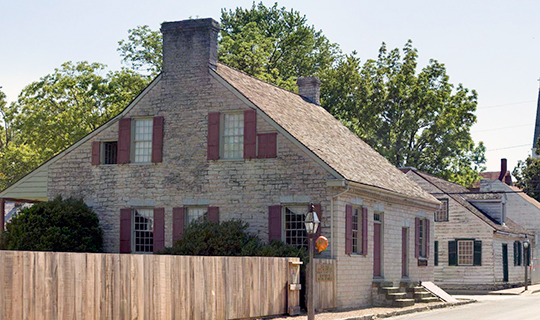 Ste. Genevieve as described in 1941

Ste. Genevieve, with its very old homes and business houses, its massive red-brick church and walled convent, gives reality to the French tradition that forms so much of Missouri's background. Its heart is Du Bourg Place, the public square, shady and informal, and dominated by a church and small courthouse rather than by commercial structures. Emerging from the square, with no line of demarcation, are the residential sections, whose quiet streets, with their flower gardens and boxwood framed houses, are lined with elm and maple trees. Some of the residences are the Creole upright log houses, now weatherboarded, which were erected during the Spanish regime. These have wide porches, or galleries, and occasionally their gardens are enclosed by rose-colored brick walls. In general, the meanderings of the North and South Gabouri Creeks mark the north and south, and the Old Cemetery between Fifth and Sixth Streets the west boundary of the old town. A new city of crisp modern houses and wide streets encircles the original village.

Trading center for a fertile farming district, Ste. Genevieve is also the shipping point for an excellent grade of marble and is one of the largest lime-producing towns in the State. But perhaps the best index of its life and manners is its festivals. On New Year's Eve, masked revelers dressed as Indians or blacked as Negroes shuffle from house to house, accompanied by a fiddler and singing "La Guignolee," an ancient French song with unwritten music and traditional words. At one time it was sung to solicit food and drink for the King's Ball, held on Twelfth Night; today, however, the masked singers demand only wine.

As its history is recounted in Ste. Genevieve, no one knows where legends end and facts begin. Records trail off into old wives' tales, making charming, though sometimes improbable, stories of days before the 1785 flood. Some early dates, however, and several events that shaped the destiny of the town are definitely known. By 1715 Frenchmen had discovered lead at Mine La Motte, 30 miles to the southwest, and were mining it by crude means; in 1723 Philippe Francois Renault brought men and machinery from France, and slaves from San Domingo to work the mines. Renault abandoned his mining venture in 1744 and returned to France, but the industry which he had promoted was sporadically continued. Early maps and records suggest that families from Kaskaskia moved west across the Mississippi during the late 1740s and established farms in the fabulously rich bottom. The earliest known grants of land here were made in 1752 by Macarty, the Commandant at Kaskaskia, when 27 inhabitants owned 93 arpents (nearly 3 miles) of river frontage. Seven years later, a parish was organized at the settlement then called the "Poste de Saint Joachim." Agriculture was the primary interest of the community. Together with salt making on nearby Saline Creek, fur trading with the Indians, and lead mining "From the earliest time," Brackenridge later recalled, "the French inhabitants of Ste. Genevieve had all been more or less engaged in the storage, purchase, and traffic of lead."

When the territory west of the Mississippi River was secretly transferred to Spain in 1762, and that east of the Mississippi to England in 1763, Ste. Genevieve became an outpost of the Spanish Empire, and its affairs were shaped by the devious colonial ambitions and fears of Spain. The discontent of the Creoles on the east bank under Protestant British rule was aggravated by the withdrawal of all priests from the colony. Spain quickly took advantage of this dissatisfaction. In Ste. Genevieve, the Creole way of living was not disturbed. For the first time, a resident priest, Father Louis Meurin, was sent to the village, armed with a unique Papal dispensation to marry unbaptized Roman Catholics. Local men were appointed to administrative posts and large grants of land were offered to settlers. Soon a steady stream of immigrants began to cross the Mississippi. Nor were they all Creoles from the east bank; many came from Canada and Lower Louisiana, to be joined later by French Royalist refugees, Americans, and Germans.

Despite its growth, Ste. Genevieve (it is unknown when this name was first given to the settlement) was not a village in the American sense. Captain Philip Pittman of the English army, who visited there in 1766, found 70 families in a settlement "about one mile in length." Even in 1782 the place was considered too scattered for defense. The unusual length of the settlement, as Charles E. Peterson points out in his A Guide to Ste. Genevieve (1940), suggests that it was strung out along a main road like many of the old villages in French Canada.

In spite of the lack of civic consciousness, the richness of its soil and its commercially advantageous position brought Ste. Genevieve a measured prosperity during the following 50 years. The salt workers began supplying Indians, hunters, and the settlements of the Illinois country. A profitable fur trade sprang up. Lead production was steady. Grains, meats, honey, and lard were shipped to St. Louis and New Orleans by boat. In 1772, the settlement had a free population of 264 males, and 140 females, and 287 slaves. Ste. Genevieve was larger than St. Louis.

A garrison was established, but it was only at intervals that regular troops were stationed there. In 1778 the commandant directed that soldiers might be hired out to the inhabitants, though they were not to be given credit. There was also a jail, but a prisoner could obtain leave under escort of a soldier to attend to his business outside, and the commandant usually sent him what the Reverend Timothy Flint described as "a suitable provision of whisky to blunt the acuteness of his feelings."

In 1791, after an exciting flatboat trip from Pittsburgh, five-year-old Henry Marie Brackenridge arrived in Ste. Genevieve to learn French. He remained in the village three years, and made frequent visits later in his life. His accounts of the social life of the inhabitants, in his Recollections of Persons and Places in the West, are the most charming and perhaps the most accurate of early records. Each Sunday afternoon after Mass, the children attended the "ball," a school of manners at which the "strictest decorum and propriety" were preserved. The minuet was the principal dance. In this manner, observed Brackenridge, the people acquired grace and self-denial, that "basis of true politeness." Thomas Ashe (1806) tells of summer evenings when the people gathered in groups outside their houses, each group with its guitar player, fiddler, story-teller, or singer. As the evening advanced and the heat diminished, strolling began. Near midnight, the musicians of the village united, and the villagers "danced with infinite gaiety and mirth till past one in the morning."

The chief problem of the village was the annual rising of the waters of the Mississippi. In 1785, the floods reached a climax; the village was inundated with approximately 15 feet of water. Thereafter the villagers moved over a period of years to the high valley of the Gabouri Creek four miles to the northwest. A few houses were probably transported from the old village, and, in 1794, the old church was moved. When Duke Paul of Wurttemberg visited there in 1822, only "a few scattered houses" remained along the banks of the Mississippi.

Under French and Spanish government, Ste. Genevieve's "simple, gay, generous, and good-humored folk" were left to their own ways. But with the beginning of American rule, they were suddenly brought into a world filled with surveyors, clerks, recorders, lawyers, and judges, who possessed a complicated set of codes. Captain Amos Stoddard, temporarily in charge of this region, observed that the people "have yet to learn ... the procrastinations, tricks, and impositions so successfully practiced in other territories." In 1812, when the district was organized under the territorial laws of Missouri, Ste. Genevieve continued as the seat of government. Interesting visitors came to the village, among them the Duke of Wurttemberg (1822), King Otto of Greece, whom General John Bossier entertained for three months in 1830, and the Prince of Wied (1832). In 1810 John James Audubon stopped briefly in the town with his business partner, Ferdinand Rozier, who became in 1827 the town's first mayor.

River trade for a time made Ste. Genevieve St. Louis' greatest rival. The village declined, however, as St. Louis grew. The fur trade moved westward, and new methods of refining salt put an end to that industry. Many of the lead miners left for other fields. By 1836 the population had dwindled to approximately 800. Then, for a brief period the development of trade and the discovery of iron in the back country brought new wealth and a larger population. A $200,000 plank road was constructed to facilitate lead transportation between Iron Mountain and Ste. Genevieve in 1851-1853, but the planks wore out, and the Iron Mountain Railroad diverted the ore to St. Louis. Thus Ste. Genevieve had to fall back upon agriculture, and this was altered by the end of slave economy, and the large German immigration near the middle of the century.

The construction of the Frisco and Missouri-Illinois railroads and, recently, of a modern highway, together with the development of lime and marble industries, have given the community a measure of economic stability. The town's importance, however, is chiefly historical, although each year a few more of the old houses disappear, and the Creole language is fast dying out. Fortunately, the love of gardens and the custom of retaining ancestral homes has allowed the Germans to fit neatly into the older Creole pattern. The Grand Champs, privately owned, is still measured in arpents, the French equivalent of .845 acres, and is still farmed in elongated strips. Houses still have the dormer windows that suggested to Charles Dickens "a kind of French shrug," and the Roman Catholic Church remains the center of community social activity. As Ward Allison Dorrance observed in his The Survival of French in the Old District of Ste. Genevieve, to see Monsignor Van Tourenhout, who insists upon wearing about town his clerical dress—soutane, biretum, and all—conversing with a nun under the stone arch of the old convent gate is a sight not often granted in modern Missouri.