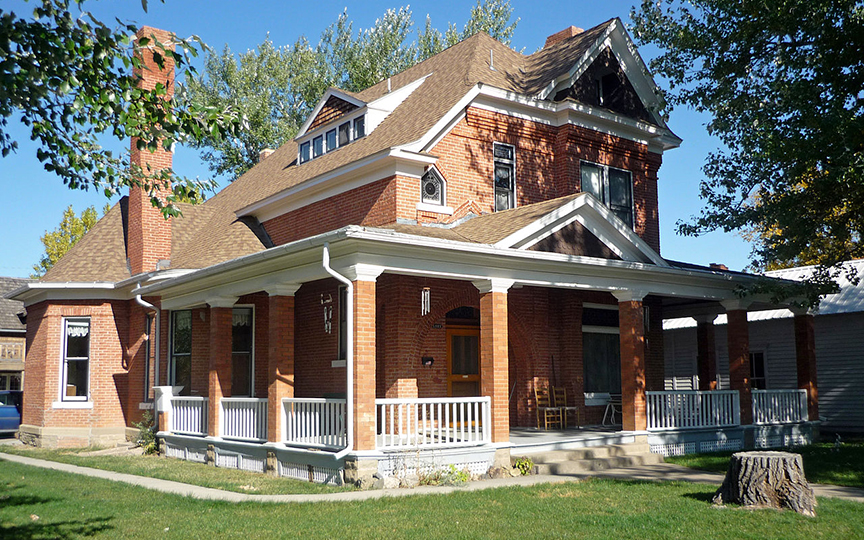 The Name Montana [1] is derived from the Spanish montaña, meaning mountain. The State, fourth largest in the Union, is bounded on the north by Saskatchewan, Alberta, and British Columbia; on the east by the Dakotas; on the south by Wyoming and Idaho; and on the west by Idaho.

Two-thirds of the surface of the State is a plain broken by a network of valleys, many of the smaller ones carrying no water except during rare floods, and by isolated groups of low mountains. The western mountainous section, roughly 200 miles wide, is composed of generally parallel ranges on a northwest-southeast axis, but the Continental Divide follows a meandering course north and south. In the north, the main range of the Rockies fronts the eastern plain, but farther south an increasing spread of ranges lies east of the Divide, comprising the source of the Missouri River and its tributaries.

Montana's most important eastern rivers are the Missouri and Yellowstone. As evidenced by its broad alluvial plain, the Yellowstone is the older; it also has the most direct course. Its valley, one of the most productive agricultural districts in the State, has terraced landscapes shaped by long processes of land elevation and erosion. The Missouri is the large river, formed by the junction of the Madison, Jefferson, and Gallatin at Three Forks; it describes a huge, irregular northerly arc on its course eastward. Its valley bottom is narrower, the sides generally lower and smoother than those of the Yellowstone, but more rugged than those of the Milk, an important northern tributary. Between the Missouri and the Yellowstone lies the vast expanse of prairie, cut by tributary streams into grassy uplands and rocky hills.

Evidences of prehistoric man in eastern Montana appear in the form of buffalo cliffs, teepee rings, and peculiar arrangements of stones which suggest various ceremonial uses. A few graves have also been uncovered.

Indian artifacts found in Montana include spearheads, arrowheads, and knives; stone pestles, hammers, and mauls; and red and black soapstone pipes for smoking wild tobacco. Pipes were a treasured possession.

To the Plains people the great provider of food, shelter, and tools was the buffalo. Bitter intertribal wars were fought over his ranges; his favor was wooed in many ways. Some villages had a saying: "Do not steal. A buffalo will search you out and expose you."

An 18th century French trader, Pierre Gaultier, Sieur de Varennes de la Verendrye, heard Indian tales of a river that flowed into a western sea. In 1738, after obtaining a grant of the fur trade monopoly from the French Government, he made his way to the Mandan villages in what is now North Dakota, then returned to Montreal by way of For La Reine, near the site of Winnipeg.

In 1742 he sent two of his sons, Pierre and Francois, on another expedition. After long, dreary marches across the Dakota plains, they first say, in early January 1743, the "shining mountains" generally believed to have been the Big Horns of Wyoming and southern Montana. The elder Verendrye died in 1749 and his sons were deprived of their grants, and the French and Indian Wars stopped all expeditions of discovery. In 1763 New France (Canada) passed into British hands, and Louisiana came under the control of Spain. No other white men were to see Montana's "shining mountains" for more than 60 years.

Montana had been a component successively of Oregon, Washington, Nebraska, Dakota, and Idaho Territories, always with the seat of government far away. Miners' courts had been organized but were largely ineffective; knowledge of law was not necessarily a qualification of judges. As people poured into Montana after the discovery of gold in the 1860s, some local government became a necessity. The organic act of May 26, 1864, created Montana Territory, and Sidney Edgerton became Governor. Three justices were provided. The first Territorial Legislature met at Bannack and enacted provisions that form the basis of later codes.

In 1865 the legislature changed the capital to Virginia City, established the original nine counties, and then adjourned without providing for future meetings. As a result the court refused to recognize the legislative acts, this creating grave antagonism between the Bar and the People. Congress somewhat eased matters by passing an enabling act for the Legislature of 1867. The new government followed Idaho statutes in legislative and judicial procedure, but among its problems were water rights and mine law, both new branches.

A movement toward statehood in 1865 resulted in Acting Governor Meagher's calling a constitutional convention. Eight of the delegates did not bother to attend. The constitution was sent to Saint Louis for printing and was lost somewhere along the way.

At first Montana Indians were not invariably hostile — as shown by the Laramie treaty (1851) and the Isaac I. Stevens treaties (1855) — but government on both sides was inadequate to compel observance of agreements, and frequent clashes resulted.

The coming of the railroads and the admission of Montana into the Union spurred growth, especially in the case of Billings, Havre, Kalispell, Missoula, Miles City and the mining and smelting towns. Those fortunately placed as distribution centers grew most rapidly. In Bozeman, Missoula and Dillon, the establishment of units of the University of Montana in 1893, 1895, and 1897, respectively, helped greatly in laying the foundation for later development, both economic and cultural.

Republicans and Democrats had about equal strength in the young State, and politics was lively from the start.

† In 1977 Silver Bow County and the City of Butte merged becoming the Consolidated City and County of Butte-Silver Bow.