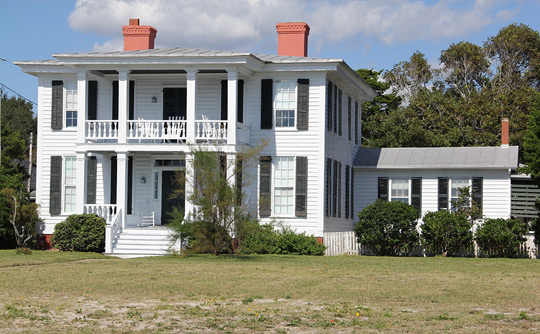 The town of Beaufort was laid out and named on October 2, 1713, on land owned by Robert Turner, a local settler. Though laid out by permission of the Lords Proprietors, the town was not incorporated until 1723. In the meantime it had been established as a port of entry for the colony and had also been designated as the site of the courthouse for Carteret Precinct, which was established in 1722.

Numerous lots were sold immediately after Beaufort was laid out, but few of the purchases made their homes in the town. As late as 1765 it was described as a town of not more than 12 houses. About 1765, however, settlement became more substantial, and in the next few years efforts were made to give Beaufort more of the atmosphere of a well-ordered town.

Every class of colonial society except the wealthy aristocracy was represented by the inhabitants of Beaufort. Social activities were restricted by the demands of making a living, and efforts were made by the precinct government to curb moral laxity. Formal education in Beaufort had its beginning in 1744 through provisions made by James Winright, the proprietor of the town. The dominant church was the Anglican Church, whose various functions were carried out through St. John's Parish.

The economy of Beaufort was based upon the utilization of the natural resources available in the area. Hence, fishing, whaling, the production of lumber and naval stores, shipbuilding, and farming were the chief economic activities. Though Beaufort had the safest and most-navigable harbor of any of the ports of North Carolina, extensive commercial activities failed to develop, owing to the fact that the town was almost completely isolated from the interior.

Nearby Towns: Town of Morehead City •