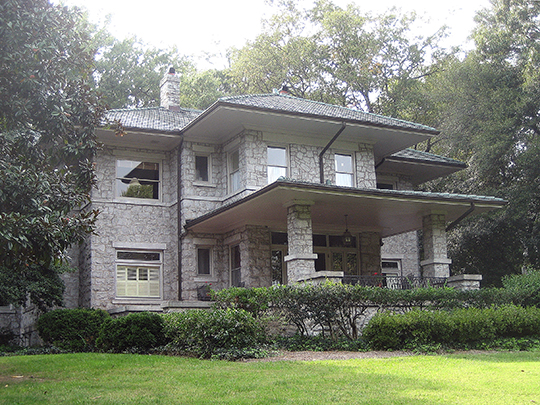 Guilford County was erected in 1770 by an Act of General Assembly then in session at Newbern. The new county was called Guilford in honor of Lord North, Earl of Guilford, who was a Tory, King George II's Prime Minister, and "one who bowed to the royal will, and endeavored to carry out George III's favorite policy of 'governing for, but never by, the people.'"

The first settlers came to the area about 1749. At that time a heavy stream of migration was pouring into North Carolina. In the portion of the State marked by the towns of Greensboro, Salisbury, Concord and Charlotte, the Scotch-Irish and German settled.

To this area people representing three nations, the Scotch-Irish, the German exiles from the Palatine, and the English Quakers came. These people were dissenters seeking religious liberty as well as homes for their wives and children. From the colony of William Penn, where they had first set foot on American soil, through Virginia, where the Church of England was already established, and traveled through a wild country to a milder climate and the freedom of forest and river to be found in Piedmont, North Carolina. In the beautiful scope of country that later became Guilford County these three peoples settled, building their homes amid the fertile, rolling plains and wide ridges of Middle Carolina. The houses, manners and customs of the lands they had left were soon firmly fixed upon the new country.

In central Guilford the Scotch-Irish settled; in east Guilford the Germans built their homes; while in west Guilford the English Quakers took up their abode. A band of Welsh also came into this section.

In central Guilford were: the Archers, the Brannocks, the Caldwells, the Dennys, the Donnells, the Foulkes, the Gillespies, the Gorrells, the Hunters, the Kerners, the Lindsays, the McAdoos, the McMikels, the Osbornes, the Stokes, the Sanders and the Weatherlys. (Mr. Robert M. Sloan of Greensboro is authority for this.)

In west Guilford were: the Armfields, the Beasons, the Chipmans, the Coffins, the Elliotts, the Edwards, the Gardners, the Horneys, the Mendenhalls, the Pughs, the Starbucks, the Stanleys, and the Welborns.

One band of Scotch-Irish came from Lancaster County, Pennsylvania; another poured in from Charleston, South Carolina. These two streams met in central Guilford. A company called the Nottingham Company of Pennsylvania bought a large tract of land on Buffalo and Reedy Fork Creeks. These were the blue-stocking Presbyterians. On the headwaters of the Alamance the followers of Whitfield built their homes. Old Alamance Church was the nucleus of the neighborhood.