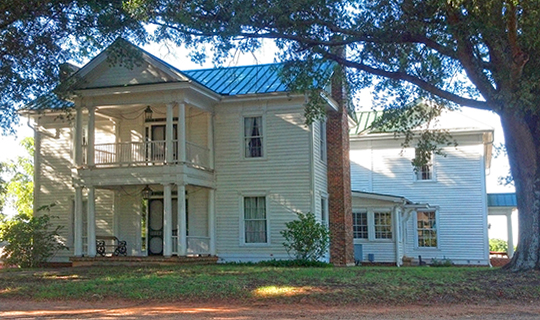 When Iredell County was carved out of western Rowan in 1788, one of the first decisions to be made was the selection of a site for the county seat. After much debate, the General Assembly in 1789 passed a bill which placed the county seat on a site next to prominent Fourth Creek Presbyterian Church in the central part of the county. On May 25, 1790 Fergus Sloan sold 68 3/4 acres to the county commissioners for the town that was to be called Statesville. Why the name "Statesville" was chosen is no longer clearly known. After the town boundaries were laid off, a log courthouse was built in the center of the Square created by the intersection of the two main streets, Broad and Center. Although the Courthouse is no longer located at this site, this intersection remains the center of town, surrounded by the commercial core of Statesville.

During its earliest years Statesville was a tiny community where the county court met four times a year and where the clerk of court kept his office. From the first, however, there were two taverns and at least three stores. In 1800 there were only 76 persons in town, six of whom were slaves. In 1820 the log courthouse was replaced by a brick one. By 1834 there were two taverns, which doubled as hotels, six stores, one on each corner of the square plus two others, three doctors, three lawyers, three shoe shops, two tailor shops, a carriage shop, a tanyard and other small-scale industry. By 1850 Statesville, population 215, had grown somewhat as a trading center, with nine merchants listed in the 1850 census. Then on December 18, 1854, Statesville received a tremendous setback when a great fire burned the courthouse and most of the town west of Center Street.

The town soon began to rebuild after the fire. One big change was the new courthouse, built in 1855. It was not built on the Square, as had been the first two, but rather was relocated on the west side of South Center Street a half block from the Square. For the next few years, even before the railroad arrived in 1858, there was much building activity in Statesville.

As in so many of the state's towns, the greatest impetus for growth in Statesville, which transformed the town from a county seat village to a bustling trading center, resulted from the arrival of railroads in the late 1850s and early 1860s. On October 1, 1858, the Western extension of the North Carolina Railroad reached Statesville and opened up a whole new world of possibilities for trade. In March of 1863 Statesville's second railroad—the Atlantic, Tennessee and Ohio—reached town but was immediately dismantled to provide iron for the railroad from Greensboro to Danville, which enabled the South to get supplies more easily to Lee's army in Virginia. The AT&O had been rebuilt, however, by 1871 and still other railroads followed. Statesville's grand opportunity had arrived.