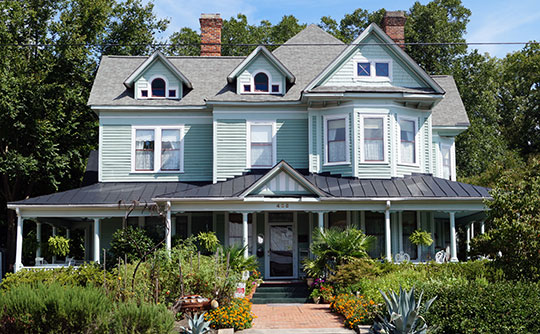 The City of Greenville was laid out on the south bank of the Tar River in 1774. A courthouse was constructed and the small town served as center for government and trade in Pitt County. Most Pitt County residents survived through subsistence farming. However, by 1860 Pitt County's economy had transformed from subsistence agriculture to a cash-crop system, becoming one of the leading cotton producing counties in the state. Steam-powered boats enabled shipment to distant markets. Greenville's status as a steamboat stop and courthouse town perpetuated its growth in the middle years of the nineteenth century. Greenville was linked to the rest of the state by rail in 1890. Pitt County farmers exported cotton and tobacco by rail and by 1900 Greenville became a major tobacco market along with the eastern North Carolina towns of Rocky Mount, Goldsboro and Wilson. As a result of Greenville's emergence as a major eastern North Carolina tobacco trading market, Greenville's commercial district continued to grow into the twentieth century, spurred on in part by the founding of the East Carolina Teachers Training School in 1907, which brought students and faculty from across North Carolina to Greenville. By the 1910s and 1920s the commercial core contained residences, retail stores, and offices and continued to be the county center of government and civic life. By the 1930s Greenville had a large enough population to attract national chain department stores such as McClellan's and Montgomery Ward in addition to locally owned businesses. After World War II, Greenville became one of the largest tobacco markets in the state, and the downtown continued to thrive. By the mid-1950s the area was beginning to be negatively affected by changes in architectural practices, suburban land use patterns and the county's shift from an agrarian to an industrial economy.

By 1860, Greenville had grown to a population of approximately 1,800 with seven doctors, three lawyers, a dozen merchants, six carpenters and two brick masons. In 1859, a temple-form Greek Revival courthouse with a Doric portico and cupola was under construction on the site of the second courthouse that had burned the previous year. The location also is the site of the current courthouse, constructed in the Classical Revival style in 1910 after fire destroyed the 1859 structure. This block has been continuously used for government functions since the city's incorporation.

By the mid-nineteenth century railroads were replacing steamships and plank roads for commercial transport. Steam-powered boats were limited to areas with navigable waterways. And small, eastern North Carolina waterways such as the Tar River required constant dredging to remain passable. However, railroad service came relatively late to Greenville compared to other parts of eastern North Carolina. By 1858, the ninety-six mile Atlantic and North Carolina railroad from Goldsboro through New Bern to Beaufort was completed. The line later became part of the larger Norfolk and Southern network. In 1885, Pitt County citizens voted down a proposed rail link that would have connected Greenville with Goldsboro, and from there to the Wilmington and Weldon Railroad. The proposal was rejected because it would have required the county to pay a hefty tax to fund the project. A few years later, the Wilmington and Weldon Railroad proposed the construction of a line from Halifax to Kinston, via Greenville. The history of Greenville may have been radically different had the town missed this second chance to connect with rail service. Greenville's citizens and the business community did not let this opportunity pass and finally embraced the rail line. In 1890, the Wilmington and Weldon Railroad line was run through Greenville providing both rail and passenger service. In 1907 the Norfolk and Southern Railroad also extended a line through the town.