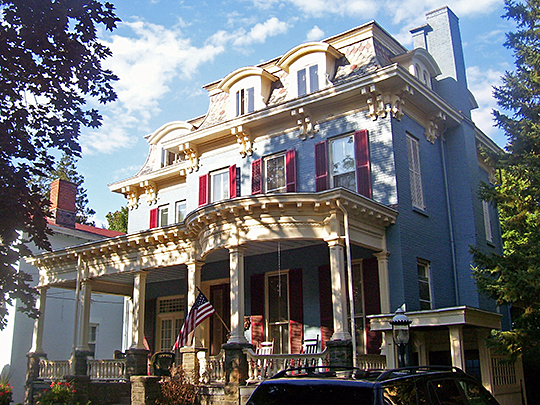 Kingston served as the capital of New York until 1777.

In 1652 a permanent settlement was made. A large proportion of the early settlers were Hollanders who stamped indelibly upon the colony the impress of the Dutch. They, as was their custom, bought their lands from the Indians, and lived upon their scattered farms for four years without any serious difficulty with the earlier owners of the soil. Thomas Chambers, the first English settler, had received a large grant of rich land in the valley of the Esopus, still exceptionally fertile.

The whole region was then known as "The Esopus," a name that clung to the village of Kingston for nearly two centuries. It was named Kingston when the colony came under the control of the British government.

It seems clear from official papers as well as from stories and traditions handed down through generations that there might never have been any serious difficulties there between the whites and the redmen had the former left their " fire-water " on the other side of the Atlantic. An incident that occurred in 1658 emphasizes this. A party of settlers were playing tennis at the tennis court in "Esopus," some Indians looking on with interest. An "anchor" of brandy was discovered conveniently placed at the foot of a tree. The Indians enjoyed it, as did the others, but with a different result. They became wildly intoxicated, fired upon a yacht, and killed a man. The settlers, excessively alarmed, besought the aid and protection of Governor Stuyvesant. In their application to the governor they stated, to show the importance of the place, that they had " sixty or seventy people who support a reader at their own expense." The reader thus alluded to was the lay-reader, and "comforter of the sick," who at or before this period had conducted church services. Strange to say, he was an ancestor of the present pastor, and bore the same family name. Van Slyke, or Vander Sluys.