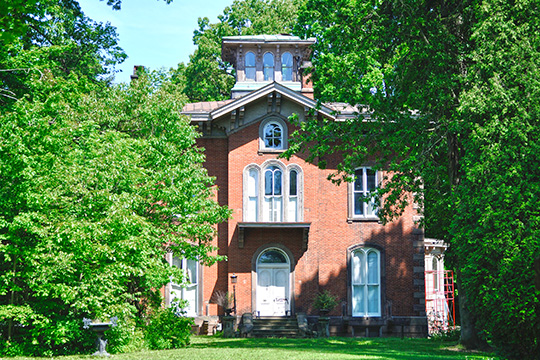 The city of Mount Vernon is located in central Knox County and has served as the county seat since the county's formation in 1808. In more recent years, it has been recognized as an "All American City" by both Look Magazine and the National Municipal League, and by Ohio Magazine as "Ohio's Most Livable Community."

In the more than 200 years since the establishment of Mount Vernon, its residents have seen growth and change in many areas - progress in agriculture, expansion of business and industry, economic ups and downs, military encounters, immigration issues, improvements in education, religious issues and many others.

In 1805, the original proprietors of the town saw fit to name it after the estate of the country's beloved first President, and three years later the new county was named for Washington's friend and fellow general, Henry Knox. John Chapman, better known as Johnny Appleseed, voted in the first election, owned property and spent considerable time coming and going through Mount Vernon. Daniel Decatur Emmett, musician and traveling minstrel, was born in Mount Vernon in 1815. And soon the town's growing population would include more than a few men who had fought with Washington for America's independence.

These new residents came from a wide area, not just Pennsylvania, New York, Maryland and the New England states, but also Virginia, Kentucky and Louisiana, bringing a wide range of attitudes on the topics of the day.

Within the first 25 years, new churches, schools and businesses were established, newspapers were published, political offices were created and filled and young people would leave nearby farms to work at the new Cooper brothers foundry, build homes and create businesses of their own. Before long, residents were debating the issues that led to the Civil War and young men were eagerly signing on for military duty, later to be honored with a monument on the Public Square. The 20th century brought both economic expansion and turmoil, requiring adaptation and change. But the town has preserved the beauty and charm that has attracted so many newcomers over the years. Its architecture, business opportunities and educational, religious and entertainment facilities have made Mount Vernon a great place to live.