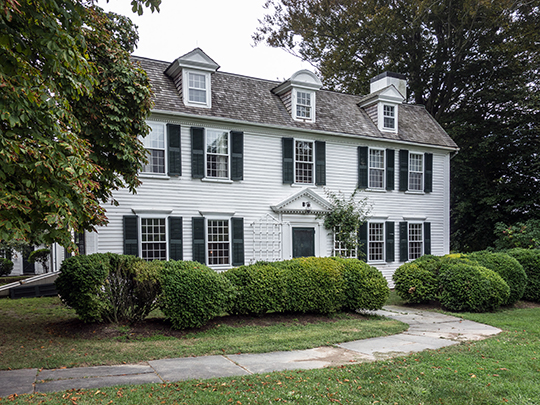 The earliest historical reference to Bristol (July, 1621) shows that Montaup, (name anglicized to Mount Hope), was the headquarters of Philip, son of Massasoit, chief of the Wampanoag Indians. Some scholars believe that Bristol was visited by the Norsemen between A.D. 1000 and 1008, but the claim has not been substantiated. The inscription on 'Dighton Rock' near Taunton, Massachusetts, which was one of the chief points put forth in favor of Norse occupation of this region, has been shown to be of Portuguese origin in the sixteenth century. About A.D. 1000, the Norsemen touched some part of the North Atlantic coast between Narragansett Bay and the St. Lawrence River in Canada, but the exact spot has never been satisfactorily determined.

Among the old Indian grants conveying lands to the English is one relating to Sowams (March, 1653), wherein Massasoit and his eldest son, Alexander, agreed to remove from within granted premises in favor of the Plymouth purchasers. Soon after the death of Massasoit (1662) and Alexander (1663), the remnant of the Wampanoags under Philip gathered about Mount Hope. A fence was built across the neck from the Warren to the Kickemuit River, to mark the line between the Indians and the English. In 1669, Plymouth Colony granted one hundred acres of land within the present limits of Bristol to John Gorham; and in July, 1672, Gorham, Constant Smith, and James Brown were appointed by the Court 'to purchase a certain parcel of land of the Indians, granted by the Court to said Gorham. John Gorham may be regarded as the first white settler in Bristol. His home was destroyed in June, 1675, at the beginning of King Philip's War.

The war began June 20, 1675, on Pokanoket Neck. The Indians plundered the houses of the settlers on the Neck, but it is believed that they offered no violence to the settlers they met on the way to the raid because of their feeling that the side shedding first blood would be conquered. On June 29, 1675, Philip, fearing he might be hemmed in on the Mount Hope peninsula, fled to Tiverton. Shortly after he was compelled to retire to the Nipmuck country, and the tide of war rolled away from the Mount Hope lands to the settlements between New York and Maine. For more than a year the combat continued, until Philip, deserted by his followers, sought refuge at Mount Hope. He was killed by a renegade Indian, Alderman, on August 12, 1676.

At the close of King Philip's War, the Bristol lands were claimed by Plymouth by right of conquest, and were confirmed to that Colony by royal decree, January 12, 1680. The Plymouth Colony on September 14, 1680, sold to John Walley, Nathaniel Byfield, Stephen Burton, and Nathaniel Oliver all the land now included in the town of Bristol, except that section previously granted to John Gorham. Bristol was incorporated by Plymouth Colony on October 28, 1681. By royal decree, May 28, 1746, the eastern boundary between Rhode Island and Massachusetts was settled, and Bristol was annexed to Rhode Island and reincorporated.

Soon after its settlement, Bristol people began to engage in commerce with the West Indies and the Spanish Main. The first recorded shipment (November 6, 1686), consisting of a number of horses, was consigned to the 'Bristol Merchant,' bound for Surinam, British Guiana. Slave trade was introduced in Rhode Island about 1700, and Bristol was not slow in joining Newport and Providence in this highly profitable industry. It has been estimated that over a fifth of the total number of slaves crossed the Atlantic to British America in Rhode Island vessels, and that of this fifth Bristol slavers carried the largest share. Shipping steadily increased until, before the Revolution, at least fifty vessels were owned and manned at this port. The vessels were usually of small size, and many of them were sloops. Horses, sheep, pickled fish, onions, carrots, etc., made up the cargo on the outward voyage, and coffee, molasses, sugar, rum, and tropical fruits were imported. The outbreak of the Revolution struck hard at the prosperity of this flourishing commercial town.

On October 7, 1775, a British commander, Sir James Wallace, sailed his fleet of war vessels up Narragansett Bay from Newport, and bombarded the town, but withdrew after levying a tribute of forty sheep. A number of houses were struck during the bombardment, yet only two lives were lost: one child died from exposure, and the Reverend John Burt died of fright.

A band of five hundred Hessian and British troops advanced on Bristol from Warren on May 25, 1778. American forces in Bristol numbered about three hundred men. The number of the attacking party was grossly exaggerated, and the American commanders marched their small force out of town. The British, finding the town at their disposal, marched down the main street burning and pillaging the homes. About thirty buildings, including the Episcopal Church, were destroyed, and thirty or more citizens were carried away prisoners. The town continued to suffer from the threatening attitude of the British troops at Newport during the period of their stay, 1776-79. After the war the people of Bristol rebuilt the town, and commerce soon revived, especially the slave trade with Africa and molasses and rum trade with Cuba. The first cargo, chiefly furs, imported from China was landed at Bristol in May, 1804, by the 'Juno,' a full-rigged ship of two hundred and fifty tons, captained by John De Wolfe. Voyages to the northwest coast followed the trade with China, and a large and profitable business was also established with ports in northern and southern Europe.

Bristol was at the zenith of its commercial prosperity when the second war with England broke out in 1812. The town sent out several privateers during this war, which were very successful. One of them, the 'Yankee' though in service less than three years, captured British property amounting to about a million pounds sterling. It was a little brigantine owned by James De Wolfe, who had suffered heavy losses from the constant harassing of his merchantmen by English war vessels. Though privateering prospered, other commerce was nearly stopped, and it was with relief that the town received the news of peace in 1815. From 1825 to 1846, whale fishing was carried on to a considerable extent by ships from Bristol. At one time nineteen vessels were engaged in this business. Whale fishing began to decline before the discovery of gold in California (1849), but gold fever gave it the death blow. Many of the old merchant vessels, earlier converted into whale ships, took cargoes of gold hunters safely around Cape Horn, and were then suffered to go to pieces on the shoals off the coast of California.

Bristol engaged in few manufacturing industries during the early period of its history. Several gristmills were established soon after the town was settled. Some were operated by tidal dams and some by wind power. The first of these mills, operated by a tidal dam, was built by Joseph Reynolds, prior to 1700, on Bristol Neck. Distilleries began manufacturing rum that was shipped to Africa and bartered for slaves. Rope walks, long sheds for spinning rope-yarn and laying rope and tanneries were opened, but slowly passed out of existence. Shipbuilding occupied a prominent place among the early industries of Bristol, reaching its peak about 1850. Vessels of that period were of light tonnage, and were built for speed and endurance, rather than weight and capacity. The nineteenth century saw the rise of many new industries here. Oil works and candle factories were established in 1830, and the business was continued on a profitable basis for more than thirty years. The Bristol Steam Mill Company erected the first cotton mill in 1835. It is now the Namquit Mill and has changed from the manufacture of cotton cloth to worsted yarns. A sugar refinery, established in 1849, flourished for a while, and then stopped. The Burnside Rifle Company was established in 1853 by Colonel Ambrose E. Burnside. Colonel Burnside invented a breech-loading rifle while he was on duty in Mexico. The Burnside Company made rifles for the Government until 1857, when the factory closed. The Herreshoff Manufacturing Company, designers and builders of boats, was established in 1863. The Cranston Worsted Mills, now the Collins-Aikman Company, manufacturers of automobile upholstery fabrics, worsted knitting yarns and weaving yarns, was founded in 1866. The establishing of these and other manufactories has resulted in a great influx of Italians and Portuguese, but Americanization and intermarriage have obliterated racial differences somewhat. The fish and shellfish industries are growing enterprises here, and in them many townsfolk find a ready source of revenue.

Communication with Providence was maintained by means of packet sloops and stagecoaches, until 1830; in that year a line of steamers was established plying between Fall River and Providence, stopping at Bristol. In 1857, the first railroad between Bristol and Providence went into operation, and in 1867 the Narragansett Steamship Company established steamers plying between New York and Bristol. The two vessels built for this company were transferred to the Fall River Line in 1869.