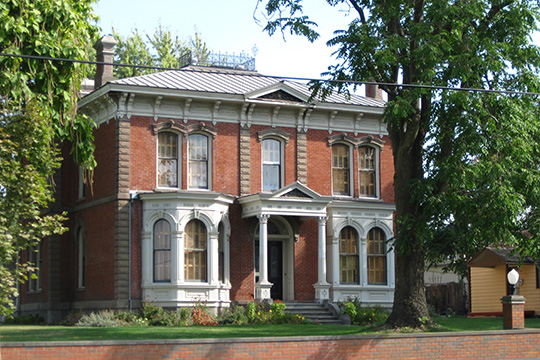 Walla Walla, seat of Walla Walla County, lies in the center of the rich farm lands of the Walla Walla Valley. To the southeast rise the hazy peaks of the Blue Mountains; northward, gently rolling hills fade into the distance. Many streams water the valley, Mill Creek meandering through the very heart of the city. The pioneers retained the Indian name for the site, Walla Walla, which means "place of many waters," a name eminently suited to the region.

The Walla Walla region has been intimately bound up with the history of the Northwest. Before the coming of the white men, an Indian trail ran through the valley, its course approximating the location of Main Street today. The valley on Mill Creek was a favored council ground of the Indians. Six miles west, in the "valley of the rye grass," Marcus Whitman and his wife, Narcissa, set up a mission in 1836 and for a decade carried on their efforts to convert the Indians to the belief and the ways of the white man. This first period of settlement ended in 1847 when Indians massacred the Whitmans.

The town of Walla Walla was founded at the end of the Indian Wars of 1855-1858. One the spot where the city now stands, Governor Isaac I. Stevens, as superintendent of Indian Affairs, and Joel Palmer, superintendent of Indian Affairs for Oregon, held a great council to which were invited Kamiakin and Ow-hi of the Yakima, Peu-peu-mox-mox of the Walla Walla, a young chief of the Cayuse, and Lawyer, Looking Glass, Joseph and Timothy of the Nez Perce, along with many others.

Stevens persuaded some of them to accept a plan for reservations though many north of the Snake River persisted in their hostility to settlers. Pioneers who had planned to establish homes farther north remained under protection of the fort that had been constructed at Mill Creek as a defense against possible Indian attacks. A settlement sprang up as the immigrants took homesteads, tilled the fertile soil and marketed their products at the garrison. The village for a short time was called Steptoeville after Colonel Steptoe, who had made his winter quarters at the fort in 1856. Two years later, the name of the settlement was established as Walla Walla. The town was laid out and incorporated in 1862.

Various factors had contributed to the growth of the settlement. The beginning of the construction of the Mullan Military Road between Wallula and Fort Benton, Montana in 1858 and the lifting of the ban on immigration into the territory north of the Snake River shortly thereafter brought several new families to the rich plateau lands.

The discovery of gold in Idaho, a few days travel from Walla Walla, brought transients through the valley during the 1860s and transformed the thriving little settlement into a boom town. When in 1861 news of the gold strike at Orofino, in present Idaho, reached other parts of the Nation, gold seekers bought their supplies at Walla Walla. Then the precious metal was found in other Idaho areas: Boise Basin, Powder River, Salmon, Owyhee, Kootenai and Blackfoot. Thousands of men surged into Walla Wall en route to the gold fields, and those who struck it rich returned to Walla Walla, which became a miners' winter resort. Hotels, stores, livery stables, saloons, and dance halls, hurriedly constructed, flourished as the lucky prospectors freely spent the valuable dust from their pouches. At the Pioneer Race Track, three miles away, there was frenzied betting for big stakes. Neither the excessive prices demanded for supplies and services, nor a period of meat shortage due to the death of cattle on nearby ranges during the severe winter of 1861, appeared to check the rush. By October 1862, fifty new buildings had been erected on the main streets and 30 were under construction. Stages were operated between the town and The Dalles, Wallula and Lewiston; Wells-Fargo inaugurated stage service to the mines. The Mullan military road was completed, and mail service started to Elk City, Pierce City and Hell Gate.

Throughout the 1860s forward-looking citizens began working for a better order and balance in the life of the community. Classes were held in a rented room until a regular school building was constructed. A post office was established, a packing plant and flour mill were built in 1859, and additional mills were opened within the next three years. In 1861 one of the earliest journals between Missouri and the Cascades, the Washington Statesman (combined with the Walla Walla Union in 1914), started publication. A fire razed the older portions of the city in 1865, and more substantial structures were constructed to replace those destroyed. The first courthouse was erected in 1867. Two years later the Baker-Boyer Bank, earliest in the territory, was established. By this time several churches had been established.

Walla Walla secured its first telegraphic service in the 1870s. A far more sensational event, and one which foreshadowed significant changes, was the completion in 1875 of Dr. D.S. Baker's steam railway, which linked the city to Wallula on the Columbia River. An engine was brought around Cape Horn by boat from Pittsburgh to push the "hearse," as the passenger car was called. Foreseeing bitter competition from this crude-looking monster, teamsters promptly reduced their exorbitant freight rates. Cheaper and speedier transportation facilities gave the region access to new markets for its farm produce. As a consequence, additional acreage was broken by the plow and planted to crops, especially wheat. In 1878 Dr. Baker was able to ship, via the railroad, river barge and the schooner, Alice D. Cooper, 66,000 bushels of wheat to England.

Arrival of the transcontinental railroad lines ushered in an era of great prosperity. The history of succeeding decades was largely written in terms of expansion of agriculture and related industries. Granaries and mills were built to handle the wheat produced in ever-increasing quantities in the region; new canneries and factories, required for the marketing of fruit, produce, poultry and dairy products, were opened. Streetcar tracks were laid and telephone lines were installed; an opera house was constructed and opened with considerable display. Today, organizations like the Grange, Chamber of Commerce, Co-operative and privately owned stores have replaced the prospector, trader, and dance hall proprietor. Modern schools, including a college which has achieved considerable distinction, a city library and numerous motion picture theaters, afford social and cultural outlets for the community. Several congregations established in Walla Walla during the 19th century have built new edifices during the past few decades; these include St. Paul's Episcopal Church, the Congregational Church, First Presbyterian, Central Christian, St. Patrick's, Pioneer Methodist and the White Temple Baptist Church.

A popular event in Walla Walla is the Christmas Show at the State Penitentiary. As a rule the entertainment takes the form of a vaudeville performance, with inmates playing all the parts.

In August 1936, Walla Walla celebrated the Whitman Centennial, honoring the establishment of Dr. Marcus Whitman's mission beside the Walla Walla River. The festival included Mother Whitman's Day, in honor of Narcissa Whitman; a colorful parade depicting "Wagons West;" and a Doctor's Day, in memory of the first American physician to practice in the Northwest. Old settlers and their descendants thronged from afar to join in the celebration.