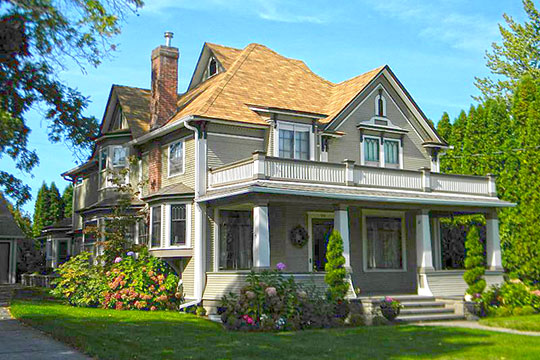 Yakima, Washington, located in the central region of the state, developed as a major urban area in the rich agricultural belt of Yakima County. Reflecting its role as a regional trade center and county seat, the city is distinguished by the most extensive inventory of architecturally significant houses in the Yakima Valley. The evolution of house styles in Yakima mirrors the growth of the region and reflects the availability of craftsmen and materials, popular architectural styles and personal tastes.

North Yakima (which became the City of Yakima in 1918) developed when the Northern Pacific Railroad selected the site for its depot and platted a townsite at the location. The first houses simple vernacular frame structures were moved to the new townsite from Yakima City (now Union Gap). Soon after 1885, however, a large number of frame houses were built at the site, many reflecting the vernacular Queen Anne style. These houses were built by carpenter-craftsmen for the farmers, merchants, and tradesmen who were attracted to the young railroad town.

Yakima grew quickly as a shipping center for the stock and agricultural products of the region. Extensive irrigation systems opened large tracts of valley farmland for agricultural development and Yakima was the hub of the farmers trade. Those who prospered from this development merchants, mill owners, ranchers, and professionals built large homes near the central business district. Several homes, constructed by contractors or architects, were built in the popular Queen Anne style (often with classical elements borrowed from the emerging Colonial Revival).

In the early 20th century, the city experienced a tremendous population boom due, in part, to the expansion of irrigation systems and the development of the refrigerated rail car. Canning plants and cold storage warehouses in Yakima were a vital link in moving Yakima crops from the field to the nation's markets. Reflecting the boom, residential development expanded, moving westward with the development of new subdivisions. After 1905, many modest bungalow and Craftsman style houses were built by contractors and developers for clerks, tradesmen, and millworkers. At the same time, larger houses designed by architects for professional and business leaders reflected the wide ranging eclecticism of the early 20th century. Styles included the Colonial Revival, English Revival, and American Foursquare. Small bungalows and larger period houses continued to dominate Yakima residential design until at least 1918, when the city, enjoying the prosperity of the World War I era, renamed itself "Yakima."

Yakima, seat of Yakima County, is located in the south-central area of Washington State. The city is situated on flat valley lands with rolling hills on its north and west boundaries. The Naches River flows along the north boundary and the Yakima River follows the east boundary. Fertile land surrounds the perimeter of Yakima with fruit orchards, vegetable, and hop fields to the east, north, and south. The forested Cascade mountain range, with the volcanic mountain peaks of Mount Rainier, Mount Adams, and Mount Saint Helens, rises in the distant west and the Columbia Plateau lies in the distant east beyond the city.