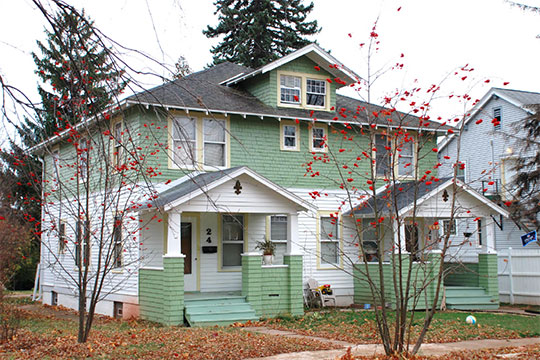 Natural resources have attracted people to the Washburn area for centuries. Over 600 years ago, wild rice and abundant fish and wildlife resources attracted the Anishinabe people to the Washburn area. Later, French and British fur traders settled in the area and used Chequamegon Bay and Lake Superior to transport their furs. While traces of these former developments can still be found in the surrounding area, the development pattern that is most evident today originated in the late 1800s when industries began harvesting and extracting large quantities of lumber and brownstone in the area. Chequamegon Bay provided an excellent port to process and ship these resources. As a result, sawmills, lumberyards, and auxiliary industries (including a box factory and shingle factory) developed along Washburn's waterfront. The waterfront was Washburn's industrial park. Commercial and residential uses developed inland from the waterfront industries.

By the early 1900s, the wood resources in the area were depleted and the demand for brownstone had waned. Existing industries on the waterfront folded and the value of the waterfront as a shipping port declined. This, in turn, adversely affected existing commercial and residential development. In the years that followed, the City of Washburn acquired former industrial waterfront sites for public use and potential redevelopment. Today, the waterfront area accommodates parks, trails, a marina, homes, and some commercial uses.

Natural resources may have been the impetus to develop a city in the area, but the general layout of Washburn owes its existence to the Chicago, St. Paul, Minneapolis, and Omaha Railroad. The Bay Land Improvement Company, the land investment division of the railroad, platted and sold lots in Washburn in the spring of 1883. The original plat of the city included 366 acres of land divided into 1,230 lots.

The railroad established a lake port at Washburn to allow the interchange of goods between ships and rail. The port was comprised of a 1,000,000-bushel grain elevator, a merchandise dock and warehouse to receive freight bound for Minneapolis and Saint Paul, and a large coal dock that received hundreds of thousands of tons of coal during its existence. The folding of waterfront industries in Washburn, coupled with the development of the road system and trucking industry, eventually led to the abandonment of the railroad in Washburn. Although Washburn is no longer served by rail, the influence the railroad had on the layout and development of the city will always be evident.

Natural resources attracted people to Washburn, and the railroad set the basic development framework of the city, but the development pattern that many people perceive today relates to the numerous vacant lots scattered throughout the city and the sporadic commercial development along Bayfield Street (State Highway 13). This development pattern has a great deal to do with the rise and fall of major industries within and near Washburn.

The DuPont Barksdale Explosive Plant operated in the Town of Barksdale, west of Washburn, between 1905 and 1971. The plant produced explosives for the military and mining industry. During World War I, the demand for explosives was on the rise, and the plant became the largest employer in the area. Washburn's population grew to roughly 9,000 people in 1918, in large part, to help meet the employment needs of the plant. To accommodate its employees, DuPont constructed housing and community facilities in the City of Washburn, some of which still exist today—most notably the DuPont Club (commonly known as the Washburn Civic Center).

In the early 1900s, the wood, mining, and shipping industries were peaking and the DuPont Plant was growing. Washburn was a vibrant, bustling community with businesses lining Bayfield Street (State Highway 13). However, after World War I, the demand for explosives declined and, consequently, employment at the plant declined sharply too. Coupled with the demise of the wood, mining, and shipping industries earlier in the century, the loss of jobs at the DuPont Plant hurt the City of Washburn. By 1960, fewer than 2,000 people lived in the city. Many of the businesses that once thrived on Bayfield Street did not survive the drastic drop in population. As a result, abandoned buildings and vacant lots began to appear in a random manner over the length of Bayfield Street. This pattern of development still exists today. Unlike many communities where this development pattern is the result of sprawling growth, in Washburn, this pattern is the result of a significant decline in population.