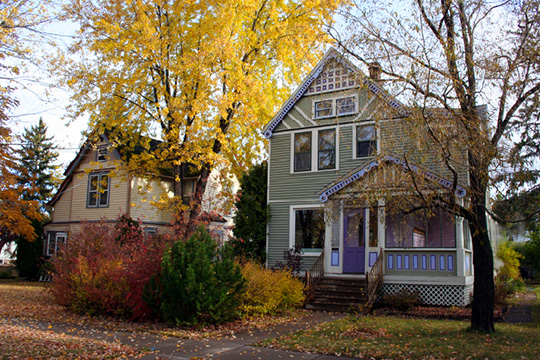 The City of Ashland began in 1854 with the arrival of Asaph Whittlesey and George Kilbourn, both of whom were in search of a new settlement. They felled the first tree in July of that year, and the first house (no longer extant) was built at present-day Lake Shore Drive West (formerly Front Street) and Eighteenth Avenue. Within just a few months, two additional log homes were constructed and New York native and Ontonagon, Michigan, resident Martin Beaser had arrived with supplies to make it through the upcoming winter. He, along with Whittlesey and Kilbourn, obtained title to the land.

In the fall of that same year, Beaser petitioned Washington to establish a post office named "Ashland" within what was then known as LaPointe County. He was turned down, however, as there was already an Ashland in Richland County, Wisconsin. For the next five years, the settlement was known as Whittlesey, until the name of Ashland had again become available. Ashland County was formed in March of 1860, while the community was named as such on 30 June 1860. The Panic of 1857 did little to promote the new settlement and, by circa 1863, the only family remaining in Ashland was that of Martin Roehm. Various accounts indicate that he and his family of five were the sole residents of Ashland from 1863 to 1869 and "empty were fifty houses of log and frame.

A renewed interest in Ashland began in 1871, when word spread regarding the construction of the Wisconsin Central Railroad from Milwaukee to Ashland. Indeed, by the spring of 1872, a significant number of homes and businesses were under construction and, by September, the local newspaper cited that "Ashland has just 190 houses completed and under construction." [The railroad, however, was not completed until 1877.]