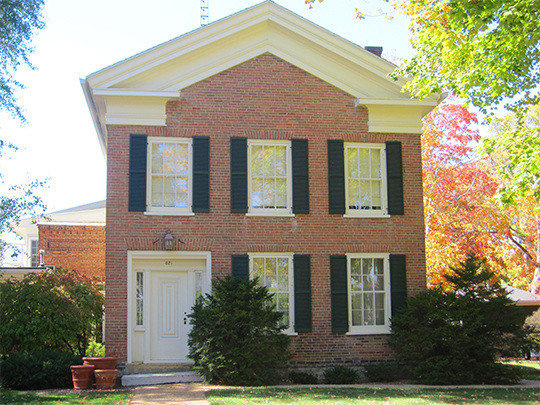 Monroe is known as "the Swiss cheese capital of the United States." It is the trade and shipping center for a small area whose 300 factories produce more than half of all the Swiss and Limburger cheese made in America. Great golden, pungent wheels of cheese are brought here from the numerous wayside factories in the region and stored in log warehouses beside the tracks to await shipment; factories within the city greatly increase the amount of produce, and many of the prosperous homes in Monroe have been built with profits from cheese. This city of cheeses and many Schweitzers was settled by Irish, Scots, Scandinavians and New Englanders. Though Monroe became the seat of Green County in 1839, it grew slowly. With the coming of the Milwaukee and Mississippi Railroad in 1857, it began to grow more rapidly. Farmers and people from neighboring towns began to bring their produce for shipment. This in the early 1870s New Glarus cheese makers brought their odorous loads to Monroe and dispatched them to a growing eastern market. School children held their noses as wagons of Limburger passed, and an ordinance was once proposed in the Monroe common council to ban the product from the streets. Reports of the flourishing dairy product industry at New Glarus reached the European homeland, and numerous ambitious men from Canton Berne crossed the Atlantic for Wisconsin and set up their factories in the favorable Monroe area. By 1883 there were 75 factories in Green County alone, and almost all of the product from the southwestern Wisconsin cheese area went to market by way of Monroe. Cheese became less offensive when money as well as odors from the new industry began to pour into the city.

In 1914 a Cheese Day was inaugurated with the enthusiastic support of the city. The seventh cheese festival, held in 1935, attracted 50,000 people to watch an elaborate parade climaxed by the crowning of a cheese queen and to feast on eight tons of Swiss and Limburger cheese. In the same year cheese was stoutly defended when Monroe's postmaster engaged in a sniffing duel with a postmaster in Iowa to determine whether or not the odor of Limburger in transit was a fragrance or a stench.

Saturday afternoons in Monroe find the townspeople evincing great interest in the display of new cheese-making implements in the windows of hardware stores, mingling with the cheese makers and their assistants, who often walk slowly on stiff and aching legs made rheumatic by the water and steam of the factories.