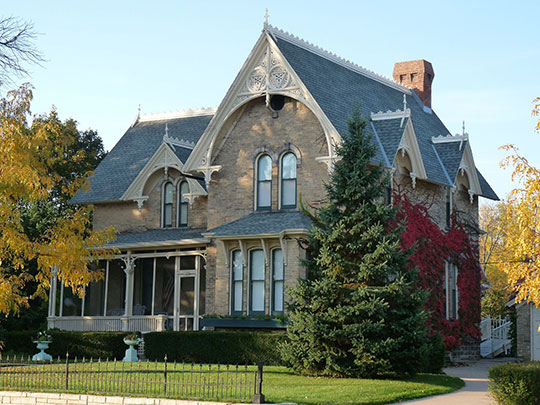 Portage County takes it name from the mile-wide strip of land separating the Wisconsin and Fox Rivers now occupied by the City of Portage in Columbia County. As county boundaries changed, the name Portage moved north, much to the confusion of newcomers for the last 150 years. This is not to say that present-day Portage County has no portages of its own. Canoeists, from ancient time to modern days, also portaged around the rocky stretches of the Wisconsin River between Plover and Stevens Point. This trail was called the "Plover Portage" and was one of the first local place names known to fur traders, loggers, and settlers.

Geologically, the County is a portage connecting the granite bedrock of northern Wisconsin to the sandy central plain and to glacial deposits pushed by the ice from the eastern part of the state. Here the glaciated region of northeastern Wisconsin meets the "driftless" zone of the southwest and where hills dotted with pothole lakes meet the dry flats and wet meadows of the great plain.

Tucked in the interior of a state with no railroads, where wagon roads were few and primitive, and separated from the navigable part of the Wisconsin River by several hundred feet of falling water and one-hundred miles of sand bars, Portage County was not easy to reach in the opening years of white settlement. Not until the railroads reached the county in the early 1870's could immigration be called a less-than-tedious endeavor. As a result, the county's population rose at its fastest pace in the first two decades after the arrival of the railroad, growing from 10,674 in 1870 to 17,731 in 1880 and 24,798 in 1890. It would take another thirty years for the county to add as many people as it did in either the 1870s or the 1880s and another forty years to do it again. By 1900, the frontier era was over in Portage County and by 1910 the population of the county would actually decline slightly.

In the 1850s, the wave of European settlement to the Wisconsin Frontier flowed heaviest from Germany, Norway and Ireland. But for the next fifty years, many countries would be represented by substantial numbers of immigrants. "Yankees," French, Canadian, and Swedish would all settle in Portage County, but none would have as much of an impact as the Polish settlers. Due to new immigration and growth of families already in the country, by the end of the century, Portage County was home to one of the largest rural populations of Poles in Wisconsin. In time, Stevens Point would become home to the largest per capita population of Polish-Americans in the United States.

Numbering 2,750 in 1890, Poles constituted the largest number of foreign-born people in the county. Since many children of Polish parents were born in this country, the actual number of people of Polish heritage here was close to 10,000, or about one-third of the county total. Germans were the second largest group of foreign-born, totaling 2,146, which multiplies to one-quarter to one-third of the county's people claiming a German heritage. Third were the Norwegians, with 900 foreign born, followed by the Canadians, 367; then the Irish, 206.

While settlers came to Portage County for family, friends, jobs or trade, the availability of land to farm was the most common motivator. For Europeans used to working land they had no hope of owning, or whose small tracts could not support a family, the prospect of acquiring acres of ground on the American frontier was exciting.

The availability of water power was the driving force behind the early development of the local economy in Portage County. The pioneers started sweating to improve the Portage County stretch of the Wisconsin River when in the late 1830s, Conant and Campbell built their first dam at "Conant's Rapids," (about one mile south of the County Road HH bridge) followed by a saw mill on the west side of the river. For the next seventy years, the rivers and streams in Portage County would power saw and planing mills, grist mills and eventually paper and pulp mills. By the mid-1880s, when the pioneer lumber industry was at its peak in the Wisconsin River Valley, Stevens Point had at least seven woodworking plants employing about 1,000 men aged twelve and older plus a few dozen women. Hundreds more people were employed in mills scattered throughout Portage and neighboring counties, while hundreds more wintered in logging camps, then used their pay for the mortgage on the home farm.

While the pioneer logging industry may have turned the key, it was the railroad that shifted the "Car of Progress" into high gear in Portage County. Settlement, industry, farming, the quality of life in general, accelerated with the arrival of the iron rails. Portage County was born in the 1840s and reborn when the trains started running in the 1870s. As an established lumber mill city, Stevens Point was a logical destination for either a north-south or east-west line across the state. Other villages with hopes of seeing tracks laid in its downtown soon withered when bypassed by the iron road.

Amherst, and other county villages with water-powered grist mills, were farm service communities. Those services expanded when the railroad made Amherst a shipping center for seed, grain, livestock, agricultural implements and potatoes. Portage County recorded its first million-bushel potato crop in 1895, but county farmers had been raising more potatoes than the local market could absorb for many years. The railroad enabled farmers to reach distant markets, making Amherst and every stop on the line a local and long distance farm market center.

The romance of the 19th Century logging era obscures the fact that the majority of the people of Portage County lived on farms or in farm service villages. Even many who lived in Stevens Point either tilled the soil themselves or owed their livelihood to those who did. The lumber industry did, however, supply jobs with paychecks that families used to pay for their farms.

By 1890, after thirty years of hard work, county farmers had "improved" a total of 140,000 acres and established 2,626 farms. Oats, primarily used to feed horses, had replaced wheat as the top yielding crop, but potatoes were already the most valuable, worth $426,126 in 1895. It was in this decade that the "general farming" period began to close and county farmers started to concentrate on the dairying and potato growing that would dominate county agriculture into the future.