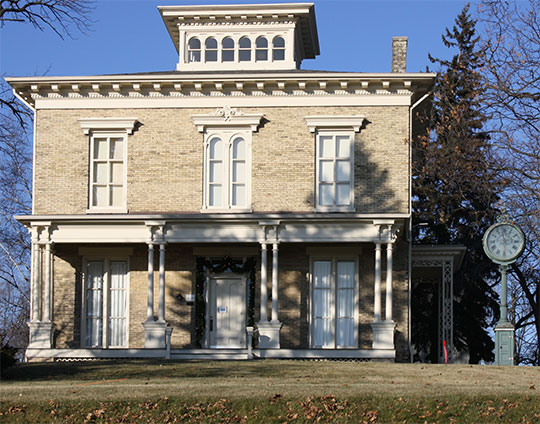 Sheboygan is built along the shore of Lake Michigan and around the mouth of the Sheboygan River. Coal docks, factory buildings and warehouses are grouped in the river flats, while the higher outlying districts, marked into checkerboard blocks, are residential and shop areas. Except for a few streets near the lake shore, where the larger, more pretentious houses stand, the architecture is staid and undistinguished, its only charm being a certain natural simplicity. Native limestone has been used very little in any type of construction; a few old houses of yellow brick are to be found. The neatness and orderliness of the streets and houses is part of the German atmosphere which pervades the city. With as much regard for frugality as for beauty, the citizens cultivate every plot of earth, giving the city a trim, gardened face. In the moist, lake-tempered climate, green parkways and front lawns flourish.

It is believed that the Chippewa named the river Shawb-wa-way-gun, (wind or rumbling underground) because of the rushing sound of the falls three miles upstream. The earliest settlement in the region occurred in 1835 when a saw mill, built at the center of what is now Sheboygan Falls, began to saw pine and oak timber. In 1836 prospectors took land and built twenty frame buildings on the site, including a hotel. But permanent settlement was not made at the mouth in that year, for in the depression of 1837 the little boom in real estate had crashed and the buildings were torn down and moved to other towns, with only one family remaining behind. By the next year, the settlement had been all but re-absorbed into the wilderness. In 1838, however, Sheboygan County, sparsely settled by Yankee traders and farmers, was organized by the territorial legislature, and roads were built to Madison via Horicon; in 1843 a road was built to Fond Du Lac. In the same year the community struck roots with the building of a store, stocked with necessities of frontier settlers that included snuff, crackers, pins, salt, codfish, striped peppermint candy and whiskey. By 1844 "The Mouth," as the town was called, had a post office, a dock, a warehouse and a pier at the lake front; the harbor was brightened by a lighthouse. The town was a convenient disembarking point for settlers entering the Northwest Territory from the Great Lakes and was the winter home of many lake sailors.

When it was granted a village charter in 1846, Sheboygan began its first period of expansion. The pier having been improved in 1845, Captain Powell began building a fleet of lake-going vessels with their home port at the village. Steamships from Chicago and Buffalo visited the port daily during the years 1845-1848, bringing more than 16,000 immigrants. Each load brought permanent settlers for the county, so many that between 1846 and 1850 the population increased from 1,600 to 8,300. Of these newcomers the majority were Germans who had left their homes because of economic difficulties or religious oppression, Sheboygan having been recommended to them by promoters' pamphlets which were being widely distributed in Germany.

By 1850 the community had a hotel, blacksmith shop, machine shop, foundry, brewery, three weekly newspapers and several retail shops. By this time the era of frontier trading had ended. The distinguishing feature of the city's next thirty years of economic development was the founding of industries and dairying. Despite the lull caused by hard times in the 1850s, the village was steadily growing, having in 1852 a population of 2,000. Charters were granted for the building of plank roads to penetrate the interior. Corduroy roads were also built. The Sheboygan-Fond du Lac plan road was finished in 1852; a road extending to Manitowoc County was finished in 1859. In 1852 Congress appropriated funds for the improvement of the harbor, and in the next year, with a population of 3,500, the village received a city charter and held its first election. In the same year J. J. Vollrath began making implements and engines in his foundry, a barrel factory and a tannery were opened and a shipyard began to construct vessels for lake traffic. In 1856 the town had an export business of $700,000 annually.

By 1860 there were 24 flour mills in the county. Wheat raising, however, was soon to reach its peak and gradually to be supplanted by other crops. When the soil showed signs of exhaustion from repeated grain growing, farmers turned to raising peas, gradually to be further supplanted by dairying. Hiram Smith began the manufacturing of cheese in the county in 1859, and the first cheese factory was built in 1864.

In its most prosperous days Sheboygan was known as the city of "cheese, chairs, children and churches," and the citizens still used the phrase in 1938, it had lost part of its meaning. Sheboygan in 1930 was the seventh largest city in the State of Wisconsin, coasting along with a level of industry achieved during the previous decade. Few enterprises were begun to replace those that left.