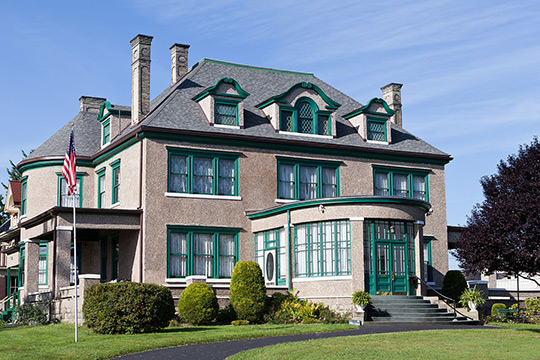 The City of Fairmont had its beginning in 1818 when Boaz Fleming laid off town lots on a portion of his farm and proceeded to sell them. In 1820 an act of the Virginia General Assembly recognized the Town of Middletown Virginia. It was named Middletown because of its approximate location between Clarksburg and Morgantown. A sister city, Palatine, was laid out in 1838 just across the river. In 1842, Marion County was formed from parts of Monongalia and Harrison Counties by an act of the Virginia General Assembly. Middletown was made the seat of the new county. One year later, in 1843, the General Assembly changed the name of Middletown to the Borough of Fairmont.

Among the industries in the Fairmont area in the early nineteenth century were small water-powered mills, blacksmiths, carriage works, and several "coal banks." The Barnesville Woolen Mill, located near the mouth of Buffalo Creek, is one such example. In 1852, a great flood swept away many of the riverside industries. However, later in the same year, a powerful force of a different kind brought commerce and industry back to Fairmont. It was the Baltimore and Ohio Railroad. The arrival of the railroad, and the immigrants who built it, dramatically increased the population of Fairmont and drove up the value of local real estate. Another significant event of 1852 was the construction of a 560-foot suspension bridge across the Monongahela River linking Fairmont with Palatine. Although this bridge is gone, its replacement, the historically significant High Level Bridge (as well as numerous other rail and auto spans), made Fairmont a city of beautiful bridges.

Between 1890 and 1930, Fairmont became the central transportation and financial center for an extensive coal mining region in north central West Virginia. This region was referred to as the "Fairmont Field." It included Barbour, Harrison, Marion, Monongalia, Preston, and Taylor Counties. Fairmont's prosperity during these years was linked to a rapid increase in the expansion of coal mining in the Fairmont Field. Overall, Fairmont reached the height of its industrial development in the early 1920s. The Great Depression forced some companies into bankruptcy; others struggled along at reduced levels. The 1930s were particularly vexing for the coal industry, which suffered from overproduction and excessive competition. Many mines were shut down and there was considerable unemployment. Fairmont eventually recovered and enjoyed another period of prosperity during WWII (due to the increased demand for coal).

Beginning in the 1960s, however, Fairmont's industrial base suffered the same slow erosion that affected the region as a whole. Yet, Fairmont is not without thriving industrial plants in the 1990s. The Alcan Aluminum Corporation cold rolling mill and North American Philips Lighting Corporation light bulb plant operate efficiently and profitably with modern technology and labor-management relation programs. For the most part, however, the economy, the population level, and the condition of the remaining industrial architecture of Fairmont have faced the same fate as other cities during the de-industrialization of the early 1980s. During this period many important industries in the City were shut down and many sites were razed.