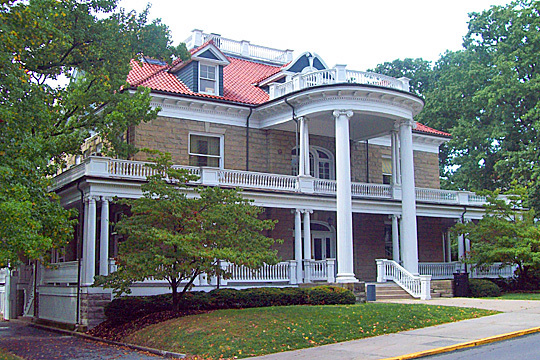 Morgantown, West Virginia as the head of navigation for the Ohio River system, assumed its role in American history in the midst of the French and Indian War, but loss marked this beginning. Thomas Decker and his fellow settlers along the creek that bears his name were victims of a 1758 attack by Delaware and Mingo Indians, who were perhaps encouraged in the deed by their French allies. The Monongahela River Valley was a battlefield where, since 1754, two world powers clashed. A state of war existed between Britain and France as they pursued their claims to New World Empire. The indigenous Shawnee allied themselves with the French and fought to eject the British and their colonial Virginian colleagues.

Undeterred by this war and Shawnee Indian resistance, colonial exploration and settlement continued. The natural advantage of the terrain soon encouraged frontiersmen to try again to settle on the small high peninsula formed by the convergence of Decker's Creek and the Monongahela River. The battles fought in this river valley taught many famous Virginians the skills they used thirteen years later, to wage war anew. By 1769 many frontiersmen were in residence. This outpost in the wilderness was a strategic necessity during the French and Indian War. Peace brought some modest trade. Familiar with the terrain, experienced rebels conferred and fought in Morgan's Town during the American Revolution, helping to secure the revolutionary frontier for General Washington, who had fought in the Monongahela Valley in 1754 and knew the importance of the Monongahela River.

Morgantown is associated with many individuals who made major contributions to the broad patterns of American history. Zackquill Morgan, an important actor in the American Revolution was the town's founder. He first settled in the area in 1772, although others had been there first. Among them was Thomas Decker, in the midst of the French and Indian War, Samuel Owens in 1769, and Daniel Veach in 1770. Decker and his colleagues were slain. Owens and Veach later sold their holdings to Col. John Evans. A tract of land between the creek and the river was conveyed to Morgan, who laid out "Morgan's Town." In 1785, Virginia chartered the town. Morgan won the land in a lottery conducted by the Virginia Land Office. He is among the earliest prominent Americans associated with downtown Morgantown, but he is hardly the only one. Many significant persons have ties to Morgantown. Most assuredly Benjamin Franklin never visited Morgantown, but he was an architect of the ill-fated Vandalia Colony that probably would have included Morgantown as one of its very few towns. In this era Morgantown was an important western settlement.

William McCleery, an early land lawyer, and Samuel Haymond, a prominent colonial surveyor, were important to the process of surveying and registering Revolutionary War land patents and pensioner claims in western Virginia in this era. McCleery served as a colonel under George Washington during the Revolutionary War, and Haymond was an associate of Washington, who mentions his fellow surveyor and a visit to the region in his diary. The surveyor and the lawyer served various clients from many distant places, because Monongalia County at the time included most of what is now the northern half of West Virginia. Some eleven new counties have been born from some or all of the territory that was the original Monongalia County of 1776. Those land records, among the oldest in American history, were filed in the Monongalia County Courthouse.