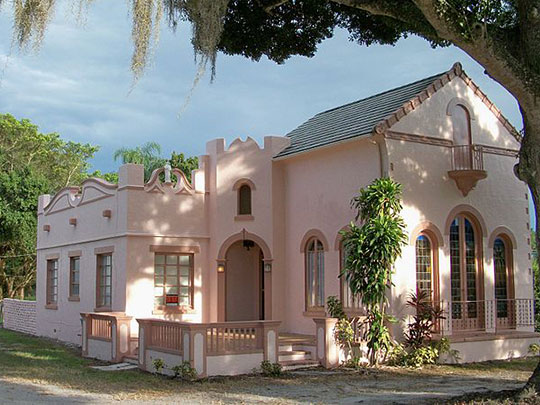 Fort Pierce was designated the county seat in 1905 at the time of the creation of St. Lucie County.

Fort Pierce, seat of St. Lucie County, is a citrus and vegetable center; it ships large cargoes of fruit, winter vegetables, fish and lumber and receives incoming cargoes of miscellaneous goods for distribution along the central east coast. From a large new pier and warehouse, with pre-cooling facilities for perishable products, steamers sail regularly five times a week to Baltimore and New York. Fertilizer and seed stores, with farm implements displayed for sale, reflect Fort Pierce's interest in agriculture. Occasionally barefoot, gaily skirted Seminoles visit the town to do their shopping, hurrying straight to the dime stores, their favorite haunts.

Sixteen cannon and four coral-encrusted anchors were salvaged in 1929 from wrecked vessels lying on a reef north of the town. Because of the heavy encrustations, it has been difficult to determine their exact origin. Dim moldings on the cannon indicate that they may have been part of the armament of an early French or Spanish vessel. When raised, the cannon were covered with coral and oyster shells, which also encased several large round stones used as ballast in early days. The cannon and anchors were scraped, painted with aluminum, and mounted on the City Hall lawn, in various parks throughout the city, and before the Chamber of Commerce.

Fort Pierce received its name from the fortification built here in 1838 as a link in a chain of east coast defenses against the Indians. It occupied a strategic position on the St. Lucie inlet, which afforded easy communication by water to the north. Settlers fought off Indian attacks and remained to set out citrus groves and cultivate winter vegetables. Prior to World War I, pineapples were grown extensively in the vicinity. Although disease and adverse tariffs practically ruined local pineapple growers, they have made a new start with the planting of hardier varieties, eradication of pests, and the use of colloidal phosphate fertilizer.