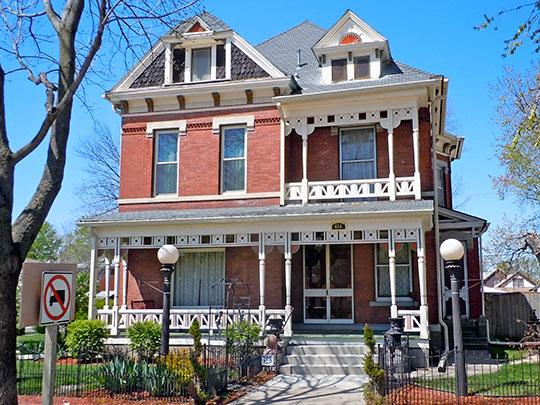 Council Bluffs, seat of Pottawattamie County, is a railroad center and an important transfer point for transcontinental mail. The original town, built against the bluffs, is laid out irregularly; but the new part, along the Missouri River, is platted in even blocks. Approached from the East, the city on the lowland is seen from hills that rise abruptly to a height of 100 to 300 feet. A natural point for east and west crossing, the city is one of the largest mail transfer points in the United States. Eight trunk lines converge here, and more than 100 freight trains and 68 passenger trains enter and leave the city daily. It is this railroad activity that gives the city a marked liveliness. Close to the railroad yards, in the southern end of the city, are the many modest homes of the working people, stretching for block after block.

The city, suburban in character, is a place of quiet and peace away from the railroad tracks.

Indians first met along the river bluffs in this region to sell their furs to French Traders. The explorers, Lewis and Clark, camped near the site in 1804. Itinerant traders and trappers, moving through the territory, later designated the whole bluff along this part of the Missouri, the Council Bluffs. Council Bluffs was early known as Hart's Bluff, named for a white man of unknown origin, who, legend says, traded at this point before 1824. Francis Guittar settled at this point in 1877 when he was appointed agent of the Hart's Bluff Post of the American Fur Company.

In 1837 the Potawatami Indians were moved into the region and Federal troops were established in a temporary camp to protect them from other tribes. Other than Davis Hardin, farming instructor provided by the Government in 1836, the Indians had no teacher until Father Pierre Jean DeSmet arrived in 1838. For the three years the mission was conducted, Father DeSmet used the camp block house as a church.

On June 14, 1846, the first Mormons arrived, and changed the name of the settlement, first to Miller's Hollow, and then to Kanesville for Thomas L. Kane, an Army officer who was friendly to them. Kanesville, an unorganized section of Indian country, was ruled by Orson Hyde, priest, writer, editor, lawyer, and chief of the church's quorum of 18 apostles. Everything was controlled by the church, which did not tolerate idleness and dissipation. Wishing to participate in the Congressional election of 1848, Hyde and a group of Mormons applied at Albia for a township government "and an election precinct. The candidates for Representative, knowing that the Mormon vote would decide the election, showered Kanesville with gifts. Controversy over the Mormon vote, however, made a second election necessary.

During the California gold rush in 1849, Kanesville, directly in the line of travel, was a stopping place where travelers rested and prepared for the long trip to the west coast. Gamblers, traders, thieves, and desperadoes flocked to the town to prey on the gold-crazy throng. Vigilance committees, organized by the citizens, decided more than one trial by lynching.

In 1850 the number of Mormons in the vicinity reached 7,828, but in 1852 Brigham Young called all the faithful to join him in Utah. Selling farms, stores, and cabins, often at great sacrifice, most of the Mormons departed for Salt Lake City. After Orson Hyde and his high council left Kanesville in the spring of 1852, the town was without government. Later the 1,000 people remaining in the town reorganized, and renamed the community Council Bluffs. In 1853 the State legislature provided a government for the newly named town, and it was incorporated the same year.

In 1852 Grenville M. Dodge came to Council Bluffs and surveyed the Platte River Valley for a railroad that is now a part of the Rock Island system. In 1859, while Dodge was at the old Pacific House in Council Bluffs, he talked with a young lawyer, Abraham Lincoln, about railroads, telling him under a barrage of questions a good deal more than he had intended. It is said that Lincoln's visit to Council Bluffs and his chat with Dodge, influenced him, in 1863, as President of the United States, in selecting this city as the eastern terminus of the Union Pacific. General Dodge returned from the Civil War in 1866 and was appointed chief engineer of the Union Pacific Railroad. By 1870, five railroads made connections with the Union Pacific at Council Bluffs.

Charles T. Kelly's army of the unemployed, on its way to Washington to petition for jobs, stopped here in 1894. An estimated 1,500 men were with Kelly when the Union Pacific train, commandeered in Ogden, Utah, arrived. Citizens of Omaha and Council Bluffs gave the men 1,000 pounds of beef and 1,000 pies.

Today manufacturing includes a wide range of articles playground equipment, beekeepers' supplies, artificial limbs, candy, and railroad car wheels. The seven large grain elevators here have a total capacity of 10,000,000 bushels. Some of the largest vineyards in the Middle West surround Council Bluffs, introducing a pattern that varies from the miles of corn and grain fields. Many of the vineyards, almost within the city limits, spread along the river lowlands from three to ten miles in width, and others cover the nearby hills with acre after acre of blue Concord grapes.