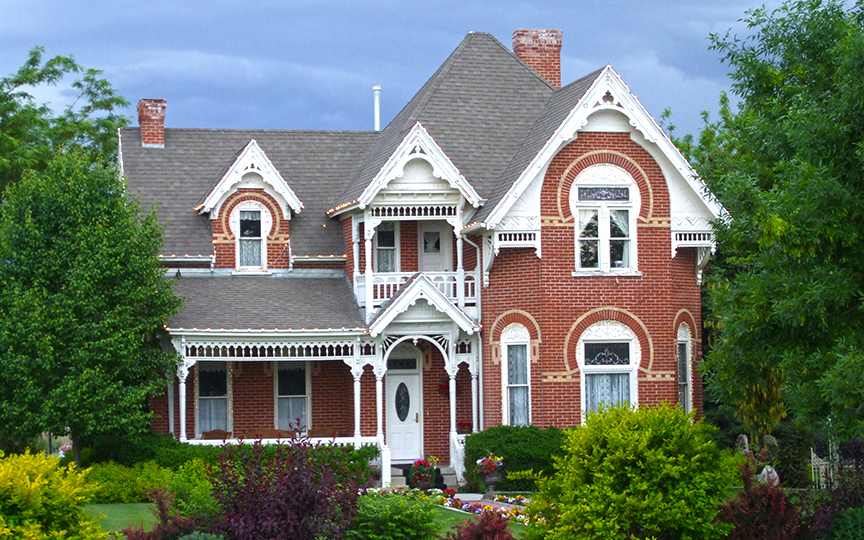 Approximately 80% of Utah residents live in an area centering around the State Capitol, Salt Lake City. The city is one of the ten most-urbanized areas in the U.S.About half of the State's residents are members of the Mormon Church (The Church of Jesus Christ of the Latter-day Saints.

The name, "Utah" derives from a Ute Indian word meaning "people of the mountains."

Utah was inhabited by wandering and uncivilized tribes of Indians until the sixteenth century, when Mexicans discovered it, and later made settlements at Monroe, Fillmore, near Oasis, and at Tooele; but they had long been abandoned before the Mormon pioneers came to Utah. During the latter part of the eighteenth and the early part of the nineteenth century, northern Utah was much frequented by trappers and traders because of the abundance of forage and game. A trading station was maintained at Ogden.

In 1843 General Fremont made a scientific examination of Utah. His report was published in 1845, and read by Brigham Young, who had for some years contemplated moving with his people to the Rocky Mountains. This report led to the setting forth of a large body of pioneers, which body had been previously organized by Joseph Smith. These reached Utah, under the leadership of Brigham Young, from July 21st to 24th, 1847. Utah is the only state in the Union that was systematically settled. To Brigham Young belongs the credit of this settlement. His colonies were provided with everything necessary for their growth and protection, and were composed of such people as would make themselves self-sustaining from the start. Special workmen were allotted to each colony, and were given the necessary tools belonging to their profession. They were well sustained by their people, for the watchword was "Support home industry." The plan of settlement consisted in clustering the people close together in towns. For the most part each place was divided into ten-acre, or (at a later date) smaller blocks. Each block was divided into four or eight parts, and each family usually had one of these. In addition to this lot, the families took up farming land outside of the town. This has resulted in Utah being covered with little settlements, and with very few houses outside of the towns.

At its settlement Utah was part of Mexico, but in the year 1850, having previously been ceded to the United States (1848), was erected into a territory with Brigham Young as governor. It contained 225,000 square miles. In 1869 it was reduced to its present size, which is 84,970 square miles. January 4, 1896, it was admitted as a state.

When Utah was a territory it had a form of government which was established by Congress. Its legislature could pass laws, but the Governor, who was appointed by the President of the United States, had the power of absolute veto on all such legislation. In addition, Congress could annul any laws passed by the Legislature and the Governor.

Before Utah's admission to the Union, Congress passed an Enabling Act whose terms were to be fulfilled by the proposed constitution of the new state before it could become a state. A constitution was duly adopted, approved by Congress, and Utah declared a state.

This fine Victorian mansion was built c. 1887 by Jeremiah C. Conklin, who acquired the land in 1882 and borrowed the money for the construction. Mr. Conklin was a realtor and property manager in Salt Lake City. In 1897 Conklin sold the home, for $20,000, to John Dern, wealthy mining man, who founded and was President of the Consolidated Mercur Company. Mr. Dern and his family emigrated to Utah from Nebraska, where he had achieved considerable stature as a merchant during the years following his immigration from Germany. It was in Dodge County, Nebraska that son George was born in 1872.

George was first employed by the Mercur Gold Mining and Milling Company in Mercur, Utah, and later became its General Manager. He was elected to the Utah Senate and in 1924 became Governor of the State of Utah, a position he served in until appointed Secretary of War under the Roosevelt Administration in 1933. He died in office on August 27, 1936.

After the Derns purchased the home, they converted the third floor ballroom into a billiard room. The home once boasted exquisite chandeliers, fireplaces, stained glass windows and elegant woodwork, as well as a turned rosewood fence surrounding the property and a fine stable carriage house. Franklin D. Roosevelt, while Governor of New York, was entertained there by the Derns, and it served as Utah's Executive mansion from 1925 to 1932. Soon after Governor Dern's death, the home was sold to the Woodbury Corporation, who converted it into office use for a realty company. The carriage house and many of the interior furnishings were presented to the Sons of Utah Pioneers and moved to their Pioneer Village at 3000 Connor Street, Salt Lake City. During World War II, the home was divided into apartments to alleviate the housing shortage. The present tenants have installed modern wood paneling in the dining and kitchen spaces; doors have been added, stairs cut off, but still much of the original finish remains and the exterior is essentially unchanged.