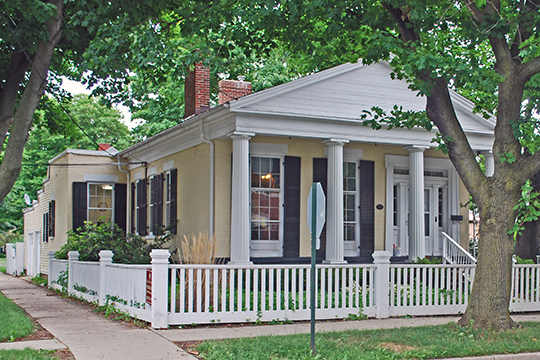 Marshall is one of the most beautiful cities in Michigan. It's also a storehouse of 19th century American small town architecture that has given it status as a National Historic Landmark District. The district includes nearly 850 homes and businesses. It's the country's second largest district in the "small urban" category having surpassed Cape May, NJ and Port Townsend, Washington. One National Park Service manager calls Marshall "a text book of 19th century American small town architecture."

Established in 1830, the early settlers expected the community to become Michigan's state capital. Thus it drew dozens of doctors, lawyers, ministers, business people and land speculators. Town founders Sidney and George Ketchum named the community for Chief Justice John Marshall of Virginia whom they greatly admired. This occurred five years before Marshall's death and thus was the first of dozens of communities and counties named for him.

Marshall was nominated as the state capital in 1839 but lost to Lansing, then a village of eight registered voters, in 1847. However, at this point Marshall had become the switching center for the young Michigan Central Railroad which kept it booming and growing during the Civil War era. In 1872, the rail yards were moved to Jackson, and Marshall seemed to slumber. However, in Marshall barns, lofts and business blocks, a new industry was growing. Marshall was becoming the Midwest's patent medicine center and the place to get "pink pills for pale people." Then the Pure Food and Drug Act came along in 1906 and effectively killed off most of the patent medicine products. The town continued to slumber and only two streets were platted from 1872 to 1920.

During the 19th century the small city was touched lightly by U.S. history in three areas: education, abolition, and unionism.

Two Marshall citizens, Rev. John D. Pierce and lawyer Issac E. Crary, innovated the Michigan school system and established it as part of the state constitution. Their method and format were later adopted by all the states in the old Northwest Territory and became the foundation for the U.S. Land Grant Act in 1861 which established schools like Michigan State University all over the country. Pierce became the country's first state superintendent of public instruction and Crary became Michigan's first member of the U.S. House.

Marshall was a station on the Underground Railroad and a strong anti-slavery town. In 1846 Kentucky slave chasers tried to capture escaped slave Adam Crosswhite and his family in Marshall. Leading citizens in turn arrested the Kentuckians and smuggled the Crosswhite family into Canada. The rescuers were convicted of "depriving a man of his rightful property" in Detroit federal court in 1847. They paid fines which they were to consider a badge of honor. The Crosswhite Incident is mentioned on several of the dozens of historical markers the town boasts. A few years ago, the Marshall Historical Society marked Crosswhite's grave (he had returned to Marshall after the Civil War) where he rests a few hundred feet from several of his rescuers.

The third touch of U.S. history was the founding of a union called the Brotherhood of the Footboard in 1863. A few months later the members realized that most people didn't know what a footboard was, so they changed the name of the union to the Brotherhood of Locomotive Engineers, still one of the country's strongest railroad unions.

Moving into the 20th century, Marshall has been home to people who understood the importance of preservation and restoration long before it was popular. This has allowed Marshall to move with the future while maintaining its wonderful past. Today, Marshall is a growing city again with new homes, apartments and condominiums being developed on its outskirts. New industry and distribution centers are developing in its industrial park, and the city also enjoys the popularity of its appeal as an escape into the past.