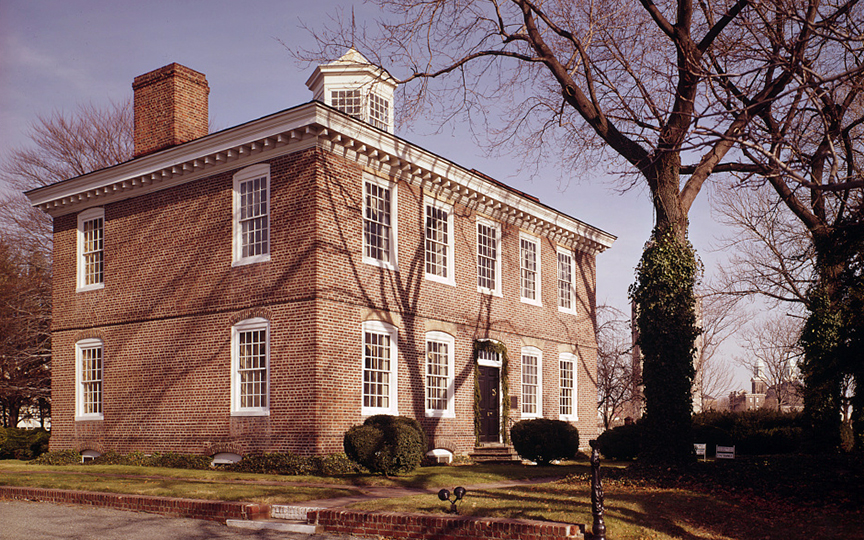 Alfred M. Heston, in his two-volume work, Jersey Waggon Jaunts, published in 1926 (Camden, NJ, Atlantic County Historical Society, 1926), twice credits Abraham Browning of Camden with coining the name at the Centennial Exhibition in Philadelphia on New Jersey Day, August 24, 1876. On page 310 of volume 2 he writes: "In his address Mr. Browning compared New Jersey to an immense barrel, filled with good things to eat and open at both ends, with Pennsylvanians grabbing from one end and the New Yorkers from the other. He called New Jersey the Garden State, and the name has clung to it ever since." The problem with this is that the image of a barrel tapped at both ends dates back at least to Benjamin Franklin, so this statement crediting Browning with naming the Garden State can not be taken at face value.

New Jersey's first permanent settlement by Europeans was at the village of Bergen, now part of Jersey City, in 1660. The Dutch, who settled Bergen, had made several attempts to settle in that general area earlier, but difficulties with the Indians had resulted in the destruction or abandonment of the settlements before 1660.

Stories From the Past [3]

New Jersey has many important stories to preserve that tell about its people and places and the important roles they have played in the history of this state and this country. There are stories about prehistory, and important individuals and events in the social, political, economic, and educational history of the state. There are also a number of themes in New Jersey history about which rich stories can be told.

The Forging of a Nation. As one of the original thirteen colonies, New Jersey played an important role in the founding and development of this nation. From 1775 to 1783 New Jersey was at the center of critical battles and events in America's War for Independence, with Washington's army spending two long cold winters camped in New Jersey. New Jersey's delegation to the Philadelphia Convention in 1787 is credited with promoting a form of government with representation based on states rather than population, a concept that led to the design of the United States Senate.

Numerous properties such as the Old Barracks in Trenton, Liberty Hall in Elizabeth and the Hancock House in Salem help recount the stories of our nation's founders. Some hundred years later, New Jersey was a border state during the Civil War, torn between the pull of the abolitionist north and the state's rights south, but it supported the Union war effort with money and troops and was an important link in the underground railroad that transported enslaved individuals to freedom.

Houses. Historic houses in New Jersey reflect a wide range of styles and building materials from the earliest settlements to the modern day. They include early log houses in northern New Jersey, "pattern brick" houses in South Jersey, rowhouses in cities across the state, and many other distinctive architectural styles and periods. Some, like the Ford Mansion in Morristown, served as George Washington's headquarters during the winters of 1779 and 1780; Craftsman Farms, home of Gustav Stickley, a key figure in the American Arts and Crafts movement in the early 1900s; and the Botto House in Passaic County, site of labor union rallies during the Paterson Silk Strike of 1913 are associated with important people and events. All have valuable stories to tell about the times in which they were built and the lives of the people who lived there and they are integral parts of the communities we inhabit today.

Neighborhoods and Communities. The historic neighborhoods and main streets of New Jersey's cities and towns reflect the diverse racial and ethnic groups who have migrated to live, work, and raise families in places like Trenton, Salem, Englewood, Bridgeton, Newark, and Gloucester City. Revitalizing historic urban neighborhoods are critical to New Jersey's efforts to achieve sustainable growth and simultaneously preserve open space. The variety of architectural detail, mixture of uses, and human scale they provide are a model for the design of new communities today. New Jersey is still home to many traditional villages and from the time of its first "utopian" community built near Red Bank in 1843, the state has played an important role in the building of model communities in this country. The State is known for the rich store of historic shore communities that line the coast. New Jersey's historic neighborhoods and towns are important not just for what they can teach us about the past, but for the contributions they can make to the attractiveness and livability of our communities as they grow and change.

Farms and Landscapes. From the time Native Americans worked the land to the present, farming has been an important part of the New Jersey economy and the state's agricultural heritage continues to play an essential role in the character of the New Jersey landscape. The Dutch barns of northern New Jersey, the fields and farmsteads of central and southern New Jersey, and important sites like Whitesbog Village where cranberry agriculture began in 1857, tell the story of generations of New Jersey residents who have farmed the land. In addition to its fields and farms, New Jersey has a wealth of other historic landscapes. From the Revolutionary War battlefields at Trenton, Princeton and Monmouth, to the historic parks, cemeteries, gardens and formal designed landscapes found across the state, New Jersey's historic landscapes comprise one of the most valued parts of our cultural legacy and contribute to its identity as the Garden State.

Industrial Sites. By the 1800s, New Jersey was at the forefront of the industrial revolution in the United States. Its strategic location between the cities of New York and Philadelphia led to the development of one of the nation's most advanced transportation systems. New Jersey's roads, steamboats, railroads and canals were built to carry manufactured goods and people to the large markets to the north and south. Historic roadways crisscross the state. The first American railroad, created in Hoboken in 1812, was soon expanded into a network of railways that had few equals. Paterson, founded as the nation's first industrial city in 1791, gives testimony to the kinds of major industrial districts that developed in most New Jersey cities. Sites like the Roebling complex in Trenton, New York Shipbuilding Company in Camden, the Edison Storage and Battery Company in West Orange, and the Rogers Locomotive building in Paterson help tell the story of New Jersey's role in the Industrial Revolution, while offering sites for new commercial, governmental and residential uses today. Other sites bear witness to New Jersey's role as the birthplace of the modern global chemical, electrical and communication industries.

Public Buildings. The New Jersey State House in Trenton; Boxwood Hall in Elizabeth; Dunham's Grist Mill, now the Hunterdon County Arts Center; and Ventnor City Hall, are examples of the many public buildings that represent important eras in the state's history. The Hudson County Courthouse in Jersey City and the early 19th century Greek Revival Courthouse in Sussex County are representative of the large number of historic courthouses located throughout the state. Brainerd School in Mount Holly, the Fairview Schoolhouse in Warren County, and Landis High School in Vineland, exemplify the state's variety of historic schools. Many historic public buildings still function as treasured landmarks and their preservation is an important part of the stewardship responsibility of the state and its localities.

Archaeological Sites. Some of New Jersey's most important history lies buried underground. As early as 11,000 years ago, Native Americans lived in New Jersey, and as their population expanded they increasingly occupied locations throughout the state, especially along New Jersey's rivers and streams. Native American communities, residences, and activity areas are important types of archaeological sites found in every county across the state. New Jersey's archaeological resources also include thousands of sites associated with historic communities, farmsteads, industrial properties and underwater maritime sites. However, the vast majority of New Jersey's archaeological sites are yet to be identified because they are rarely visible at the ground surface. These sites provide one of the best sources of information about the evolution of New Jersey's settlement patterns, economy and culture over time, a rich collection of underground stories waiting to be discovered.

New Jersey’s landscape is divided into four distinctive regions, each characterized by unique geologic processes and landforms, known as physiographic provinces. Physiographic provinces classify landscapes based on terrain texture, rock type, and geologic structure and history. These attributes play an important role in determining the natural resources of an area. In New Jersey, beginning in the northwest and proceeding to the southeast, these provinces are identified as the Valley and Ridge, Highlands, Piedmont, and Coastal Plain Provinces.