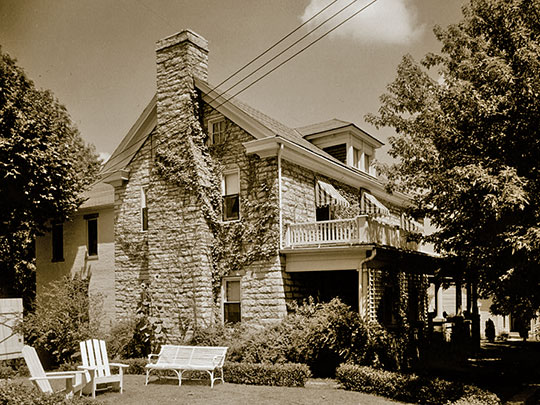 Jackson, named for Andrew Jackson, was the second town created in the Cape Girardeau District. It was officially established in 1813 when the territorial status of Missouri changed from "Territory of Louisiana" to "Territory of Missouri". It was upgraded to a second class territory and a new county seat was designated for the Cape Girardeau District. The new designation brought notoriety to the town rapidly attracting new residents. In February 1814, commissioners met and were charged with selecting a site for the new city. Many discussions from citizens and the commissioners resulted in the purchase of fifty acres of land lying along Hubbell Creek from William Ashley. Additional land was obtained from James Mills, US Survey No 2250, which is the tract number by which the town is now known and where the new courthouse and jail were constructed. The James Earl Survey on the west end of town and the Samuel Peck Survey on the east were also added. Bartholomew Cousins laid out the town and the commissioners immediately began to sell lots. The topography of the commercial area of town was on one of the highest hills (Mill Hill) which had creeks located on the east and west ends and residential homes surrounding it. The business district was visible to all, safely situated above the flood plain and was centrally located for citizens. Locally, the citizens of Jackson have referred to the commercial area as Uptown Jackson since the late 1800s.

Early pioneers believed that towns that were designated as county seats had more advantages and opportunities for prosperity and were drawn to them. Also, the political aspect of the county seat brought more social and civic events to Jackson and citizens could have felt that they would have more political pull and influence by living there.

Since the creation of the town, Jackson's economy has revolved around the agriculture community and serving the needs of area farmers. As early as the 1790s, pioneer settlers came from Tennessee, Kentucky and the Carolinas to the Jackson area and established thriving farms and settlements. These settlers were not only farmers but also skilled craftsman, schoolteachers, intellectuals and politicians who contributed to the establishment of the town of Jackson. Abraham Byrd came from North Carolina in the early 1800s; he became one of the first county assessors. The Samuel Randol family arrived in 1797 from Pennsylvania and settled along what is now known as Randol Creek. His family became prominent farmers and deeply involved with politics. Each of these families played intricate roles in the development of the town of Jackson. Their contributions and diverse talents changed a dense frontier into a thriving community.

At first it was assumed that Cape Girardeau would be named the county Seat of Cape Girardeau County. However, questions over the legitimacy of title of land donated by Louis Lorimier for the construction of a courthouse lead county commissioner's to relocate to Jackson.