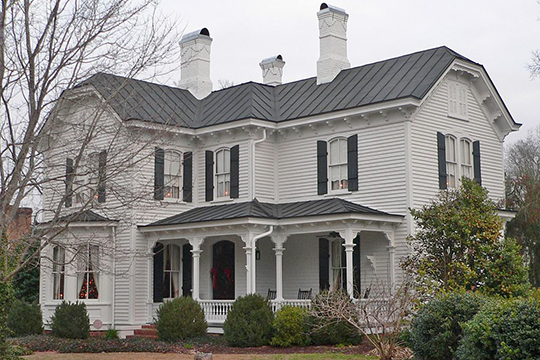 The town of Smithfield was created by a resolution of the North Carolina General Assembly on April 23, 1777, which stated that "a Town on the lands of John Smith on the North side of the Neuse River, in Johnston County (formed from a part of Craven County in 1746) where the Courthouse and other public buildings now stand ... be chartered." The original town encompassed one hundred acres, drawn off in a regular grid pattern. The area covered the current fifteen blocks from Front Street east to Fourth Street, and from Hancock Street south to Church Street

Though Smithfield did not officially become a town until 1777, it was already well established as "Smith's Ferry" by 1759 and served as an inland port. Tobacco, naval stores and timber were loaded at Smith's Ferry and shipped to New Bern for export overseas. However, for several reasons, Smithfield remained a sleepy county seat well into the nineteenth century with very little growth or change. One major reason was the difficulty of navigation in the Neuse River, which prohibited any substantial development of river commerce for Smithfield. Another reason was the fact that Johnston County was an area of small subsistence farms rather than large-scale plantations in the antebellum period. The town also missed out on potential prosperity brought by the railroad in 1856 when the North Carolina Railroad's line from Goldsboro to Charlotte bypassed Smithfield four miles to the north.

It was not until 1882 that Smithfield experienced its first real period of growth. That year, the North Carolina Midland Railroad acquired control of the Atlantic and North Carolina Railroad, a line which linked Beaufort to Goldsboro. The lease stipulated that a line must be built from Goldsboro west to Salisbury but, beset by financial problems, the line by 1882 was only completed as far as Smithfield. The railroad ran right down Market Street (then known as Railroad Street) through the heart of the business area in Smithfield, allowing merchants direct access to rail service and connecting the town with neighboring states. Commerce flourished and Smithfield did experience a boom period of prosperity. One citizen noted that during the mid-1880s the town had been "crowded with visitors 'prospecting' for business locations; that Smithfield had no empty stores, and that the town's property valuation had risen 100 percent."

The 1885 Sanborn insurance map indicates that the small but bustling business district was concentrated along roughly two blocks of Second Street from Church to Bridge streets and along Market Street between Second and Third streets. General merchandise establishments, saloons, and other assorted retail interests flourished, mainly in one and two story frame structures.

The Midland railroad line was removed from Market Street in 1886 and new lines were laid east of town. This removal initiated a noticeable slowing of the town's development for a decade or so. By 1888, the town was experiencing a local recession and in 1889 a calamitous fire destroyed practically the entire business district. Rebuilding began almost immediately, with the focus of the business district shifting one block east and concentrating around the prominent intersection of Market and Third streets. One landmark business, the Hood family drugstore, which had occupied the southwest corner of this intersection since 1887, was rebuilt on its original site after the fire. Thomas Ruffin Hood and Beau Robin Hood built a one-story brick building for their popular drugstore business. The business flourished and in 1923 the one-story building was replaced by the fine three-story Neoclassical building which still stands on the corner.

Other property at this prominent intersection was owned by prosperous local black businessman Ashley Smith, who was responsible for the construction of several buildings along Third Street in the late nineteenth and early twentieth centuries, including the handsome commercial structure at 121 S. Third. Numerous businesses along the east side of Third Street were owned by blacks in the early 1900s. Smith was a hired worker who rose to great prominence and wealth and served as a town commissioner for several terms between 1891 and 1900.

In 1898 the town's fortunes began to improve once again. A major reason was the cultivation of bright leaf tobacco in the southeastern part of the state and, as a result, opportunities for profitable warehouse businesses arose. The impact of this phenomenon on the development of downtowns in eastern North Carolina was substantial. Smithfield's first warehouse company was organized in 1898. The Banner Warehouse was built the same year. The Riverside and Farmers' Warehouses soon followed and by 1900 the tobacco market was being hailed locally as an economic bonanza.