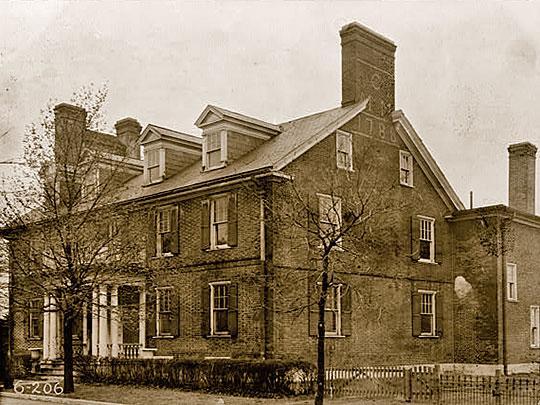 The county was created in 1844 by separating from Old Gloucester County.

The first official meeting of citizens in the county of Gloucester having for its object the division of that county was held at the house of John M. Johnson, in the city of Camden, on the 16th day of February, 1837. The object of this meeting was to consider the propriety of petitioning the legislature to authorize the erection of a new county to be composed of the townships of Waterford, Camden, Newton, Union and Gloucester and to be called "Delaware." The deliberations of this meeting did not result in anything effectual, but that agitation on the subject for which it met was kept up, is evident from the decided stand shown in the resolutions passed at a similar meeting held seven years later, on the 11th day of January, 1844, at the Friends' school house in Haddonfield, where a large number of the citizens convened in response to a notice. John Clement, Sr., was chosen chairman at this meeting and Thomas Redman, Jr., secretary. Richard W. Snowden, Jacob L. Rowand, and David Roc were appointed a committee to draft a series of resolutions, which were adopted and read as follows :

"Resolved, that in the opinion of this meeting the contemplated division of the county is altogether useless and unnecessary and would be highly oppressive, subjecting the inhabitants to a heavy taxation on the one hand without any beneficial advantages on the other, the county being at present of a convenient size and form and the public buildings already erected and in the centre of population adequate to public accommodation."

The meeting, in another resolution, recommended a county convention to be held at the Woodbury courthouse on January 22, 1844. Notice was given to that effect and a convention was held on the day appointed, John Clement, Sr., of Haddonfield, presiding. A series of resolutions and a memorial deprecating the division were presented and adopted and a number of persons were appointed to attend the Legislature at Trenton to present and support them.

The movement for a division had its friends, who were not members of the convention held, and who were endeavoring to accomplish the end desired. A bill was presented to the Legislature, asking for the division of Gloucester County by the erection of the townships of Camden, Waterford, Newton, Union, Delaware, Gloucester and Washington into a county to be called Camden.

On the 6th of March, 1844, seventeen petitions signed by three hundred and forty-two persons and twenty remonstrances, signed by one thousand four hundred and sixty-seven persons, were presented, but the bill finally passed both Houses and was approved by the Governor March 13, 1844, and Camden County took its place with the counties of the State of New Jersey. In November, 1845, an effort was made, without success, to return the townships of Washington and Gloucester to Gloucester County. Later, however, Washington (then including the present township of Monroe) was returned to Gloucester County. In December of the year 1845 an ineffectual attempt was made to re-annex all of Camden County, except the township of Camden and part of Delaware, to Gloucester County, and in September, 1846, to erect the townships of Franklin, Washington, Gloucester and Winslow into a county to be called "Washington." It is thus be seen that the erection of the new county of Camden caused considerable agitation and discussion.