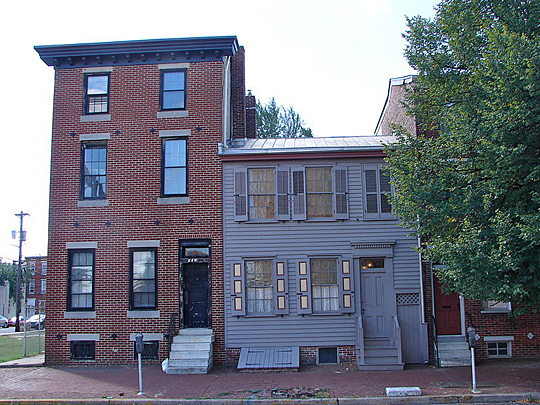 A real estate boom began in 1773 when Jacob Cooper, Philadelphia merchant and descendant of William Cooper, laid out 40 acres as a townsite. He named the place Camden for the first Earl of Camden, the noble man who had befriended the Colonies during their disputes with the mother country. Twenty-two communities in the United States have chosen the same name.

The Revolution checked development of the new village. During the British occupation of Philadelphia, Camden was held as an enemy outpost and a number of skirmishes occurred within the present city limits. Years after the end of the war Camden continued to be more a ferry terminal than a town.

About 1809 a small steamboat began operation [across the Delaware River] as a ferry for passengers. Others followed, replacing the open boats that had double keels for, use as runners when the river was frozen.

Originally part of Newton Township, Camden was incorporated as a city in 1828 and in 1844 was made the seat of Camden County. The city's real growth began in 1834 when it became the terminus of the Camden and Amboy Railroad, then the longest line in the country. All-iron rails, imported from England, were fastened to the ties with hook-headed spikes, the invention of Robert Stevens. The first locomotive, the John Bull, a duplicate of Stephensons Planet, was also English-made.

For six years the line was the only through route between Philadelphia and New York. In 1840 the railroad company opened another line from Philadelphia via Trenton and New Brunswick direct to Jersey City, which reduced the importance of the Camden route but strengthened the transportation monopoly that gave New Jersey the name of the "State of Camden and Amboy."

On the night of March 15, 1856, the ferryboat New Jersey left its Philadelphia dock and caught fire in midstream. Ice floes made it impossible for the ferry to be beached, or for other craft to get to her aid. Sixty-one persons perished. This disaster, coupled with the financial panic of the following year, hindered the town's growth.

Following the Civil War, Camden was caught up in the tremendous industrial expansion that was the sequel to railroad building. Swiftly the water front was taken over by factories. When every site was filled, the shops and mills overran the town. Industry grew steadily, aided by an in flux of foreign-born and Negro workers.

Italians and Poles predominate among the foreign nationalities, with Englishmen and Russians next in order. The Gazeta Dla Wszystkich, a Polish weekly newspaper published in Camden, is the principal foreign language journal of the city. Both the Poles and the Italians, who live in separate districts, are active in political affairs.

Camden's marine importance is indicated by a number of shipyards, one of which is the largest in the country. The well-equipped Camden Marine Terminals, operated by a State agency, have, facilities for transferring cargoes directly from steamship holds to railroad cars.