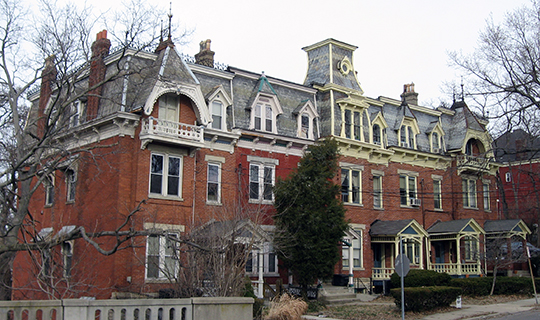 In December 1788 a fleet of craft, carrying 26 persons, some livestock, and some foodstuffs, slithered into the Ohio River's fast current and floated westward, past Marietta and Columbia, where, on the flatlands near the mouth of the Little Miami River, a blockhouse was going up. Then they saw a slim river, the Licking, going off to the south, and on the right the land ran up in terraces to a lovely valley sheltered by tall hills, plenty of water, good soil, and open space—here was the place to spend their lives. After beaching their rafts and flatboats, they tore the vessels apart and clattered together the first crude homes in Losantiville.

Cincinnati came to maturity with a long experience of building up and breaking down. First, a frontier town was set up and crops were sown. Next, banks were opened, minor manufactures were encouraged to become greater, and the wharves on the water from were made increasingly important to the great Ohio River traffic. By 1860 Cincinnati was on its way to becoming the nation's third largest city, and on of the leading gateways of northern commerce to the South. For another 40 years the swelling tide of commerce and industry continued to force the city's boundaries far back into the hills. At the turn of the 20th century Cincinnati dreamed of becoming a center of automotive production, but this industry was attracted to cities closer to the sources of steel and coal. In its place arose a highly complex, scientifically developed machine tool industry. The financial collapse of 1929 was only a temporary halt to this gigantic industrial growth. Cincinnati has now [1938] resumed her work, fresh with a new faith in the future years.

The Losantiville pioneers put seeds in the land and watched the crops grow. Occasionally they chased Indian snipers from the hills. Then, about 1800, they found that they were near coal, iron, wood and limestone, and they turned slowly from agriculture to manufacturing. As early as 1791 the first horse-powered grist mill was proudly built, but, because everybody needed meal, it rarely managed to grind sufficient grain. In 20 years the application of steam brought rest to horses weary of the treadmill, and a sudden surge of river commerce, emanating from pork packing, distilling, and other manufactories, began to shape Cincinnati into the "Porkopolis," "Ragtown," and "Floral City" of 1840-1900.