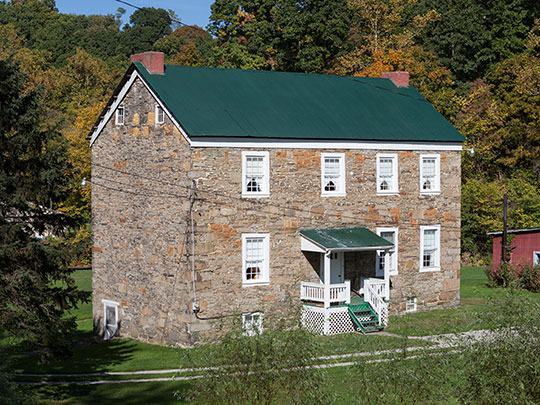 Organized September 26, 1783; named in honor of the Marquis de Lafayette; occupied prominent place in Indian, Revolutionary, and later wars. On Jacobs Creek, a mile and a half above the point where it empties into the Youghiogheny River, stands the ruins of the first furnace for the production of pig iron, west of the Allegheny Mountains; the furnace was put in blast November, 1790, and was known as the Alliance Iron Works, operated by William Turnbull and Peter Marmie of Philadelphia; it continued in blast until 1802 using the native ores from the neighboring hillsides, and charcoal burned from the surrounding forests; in 1792 the company cast four hundred six-pound shot for the Fort Pitt Arsenal at Pittsburgh. Coal mining and coke are now the chief industries. Connellsville coke is known throughout the industrial world.

Aboriginal inhabitants were the Shawnee Indians, who made various earthworks and burial mounds, along the Monongahela and Youghiogheny Rivers before their migration southward; it was part of the "Hunting Grounds" of the Iroquois Confederation; the " Indian Title" was extinguished by treaty at Fort Stanwix, 1768. In 1749 Nemacolin, a Delaware Indian, guided Colonel Thomas Cresap from Wills Creek, Cumberland, Maryland, to the mouth of Dunlap's Creek, where Fort Burd was erected in 1759, on site of "Redstone Old Fort, " an Indian earthwork, now Brownsville; this was called Nemacolin's trail, and was the best course for the Ohio Company to reach the Ohio River. It was followed by Washington, with Christopher Gist, to the French forts in 1753, the first actual step here, in conflict with France. During the "French and Indian War" Fayette County was the scene of some of the most thrilling events in American history. In 1745 Washington's expedition to gain possession of the Ohio Valley followed this trail to drive the French from "The Forks" (Pittsburgh); he advanced to Gist's Plantation at Mount Braddock, then retreated to The Great Meadows, Fort Necessity, marked by tablet at Mount Washington, where he was defeated by the French under M. Coulon de Villers; previous to this, Washington had met a detachment of French soldiers under M. Coulon de Jumonville, in which Jumonville was killed, grave marked by tablet; first blood shed in French and Indian War.

In 1755 Major General Edward Braddock's expedition against Fort Duquesne followed Nemacolin's trail to Mount Braddock, thence over Catawba trail, which enters Fayette County at mouth of Dunkards Creek; northward through Uniontown, crossing the Youghiogheny (Stewarts Crossing) at Connellsville, on through Mount Pleasant to Westmoreland County, Hunkers, Circleville, to McKeesport; crossing the Monongahela, then recrossing below at mouth of Turtle Creek. General Braddock, mortally wounded in the battle of the Monongahela, was carried back over the road he had opened to a point on the Cumberland Road, National Pike, where he died and was buried; Washington read the Episcopal burial service over him; grave marked by monument, erected by officers of his old regiment, the "Cold-stream Guards of England." Braddock's Road became the main highway for settlers of Southwest Pennsylvania and Kentucky; the entire course is full of historic interest; sites of encampments, blockhouses and Indian forts; some are marked.