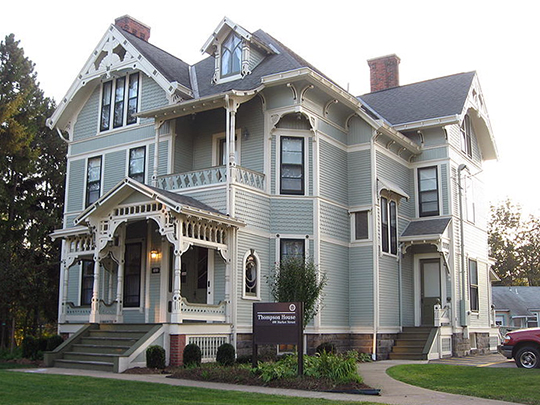 Formed March 20, 1849; named for Perry's flagship, in the Battle of Lake Erie, which was named in honor of Captain James Lawrence, United States Navy. Lawrence was mortally wounded in the War of 1812, on the frigate Chesapeake, against the British ship Shannon; as he was carried below he said: "Don't give up the ship." Chiefly settled by Scotch-Irish. The old canal to Lake Erie, built in 1833, went through center of the county, and did much to develop the resources-bituminous coal, iron ore, and limestone. Chief industries, manufactories and agriculture. Many beautiful drives are all through the county in every direction.

The Moravian missionaries, David Zeisberger and Gottlob Senseman, were the first white men who dwelt here, long before the county was formed; they migrated with the Indians from Bradford County, through Forest County, and were the greatest missionary power to them. They were visited by Glikkikin, a renowned warrior of great eloquence, who with his escort, purposely tried to refute the doctrines of Christianity; they were received by Anthony, a native convert, who treated them courteously and made such an impressive speech on Christian doctrine that he astonished the visitors; Zeisberger, coming in then, confirmed his words, and Glikkikin, instead of delivering his speech, replied: "I have nothing to say. I believe your words." On return to his town, he advised the savages to go hear the Gospel; he made them another visit, informed them that he had determined to embrace Christianity, and invited them, in the name of his chief, Packauke, to settle on land on Beaver River, near his town Kaskaskunk, now New Castle; this land was to be for the exclusive use of the mission. The offer was accepted, and on April 17, 1770, they left Oil Creek in fifteen canoes; in three days they reached Fort Pitt, proceeded down the Ohio River to Beaver River, and ascended that river to the locality given, now Moravia, passing an Indian village, near present Newport, of women, all single and pledged never to marry.

When encamped, they sent an embassy, Zeisberger, and Abraham, a native, to Packauke, who were received by the chief at his own house; he gave them welcome and pledged protection; they built houses, cleared land, planted, and prepared for winter. The Indians began to visit them, the Monseys from Goshgoshunk were the first to cast their lot with the Christian Indians; Glikkikin soon came and became a Christian force. Finally the Monseys adopted Zeisberger into their tribe; the ceremony took place at Kaskaskunk; they invested him with all the rights and privileges of a Monsey; this proved a complete triumph and was the source of much good influence among Indians. White settlers began to come after Wayne's Treaty of Greenville, in 1795.