Photo: Catlin Hall (Wilkes College), ca. 1843, 02 South River Street, Wilkes-Barre, PA. Also known as the Reynolds house, it was used as a residence by the Reynolds family into the 1950s when it was sold to Wilkes College for use as a dormitory. Named for Wilkes-Barre native painter, George Catlin. Listed on the National Register of Historic Places in 1972. Photographed by User:Smallbones (own work), 2011, [cc0-by-1.0 (creativecommons.org/publicdomain/zero/1.0/deed.en], via Wikimedia Commons, accessed August, 2013. 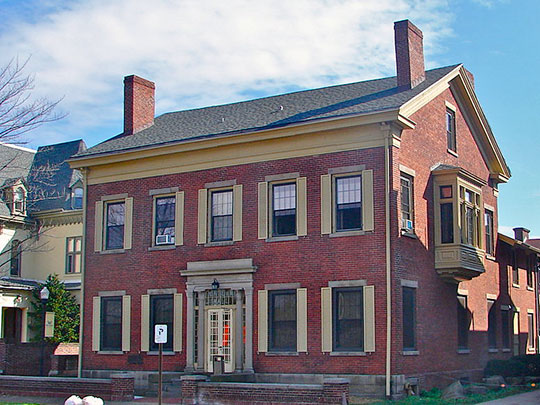 The area was first settled by the 1760s, and the municipality incorporated in 1871.

County seat. On the Susquehanna River, in the beautiful and historic Wyoming Valley. Originally called Wyoming, the town was renamed in honor of John Wilkes and Isaac Barre, members of the British parliament and friends of the colonies. The Wyoming Valley was the scene of the Yankee-Pennamite Wars which began in 1762 and lasted over a period of 40 years. The warring factions were Connecticut residents who settled in the valley on land claimed by both Connecticut and Pennsylvania, and Pennsylvanians finally succeeded in taking it from them.

Four miles above Kingston, near Forty Fort, 300 frontiersmen met an invading horde of 1,200 soldiers, Indians, and renegade whites, led by "Indian Butler," a savage Tory Colonel and "Queen Esther," half breed Seneca. They were defeated, leaving the settlements of the Wyoming Valley, unprotected. The next day, July 3, 1778, the Indians passed up and down the valley, killing, pillaging, burning-the terrible Wyoming Massacre. It was to avenge this massacre that General Sullivan's expedition made its victorious march up the Susquehanna River, laving waste the villages of the Indian Confederacy.