Photo: McClintock Hall, Wilkes College, ca. 1841, 44 South River Street, Wilkes-Barre, PA. Built for the McClintock family and used as a residence into the 1950s when it was sold to Wilkes College for use as a dormitory. Listed on the National Register of Historic Places in 1972. Photographed by User:Smallbones (own work), 2011, [cc0-by-1.0 (creativecommons.org/publicdomain/zero/1.0/deed.en], via Wikimedia Commons, accessed August, 2013. 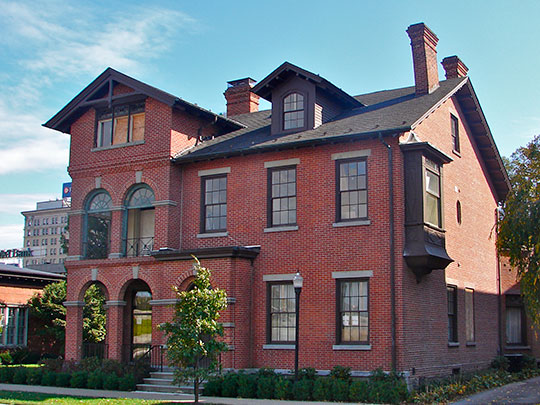 Formed September 25, 1786; named in honor of Anne Caesar, Chevalier de la Luzerne, minister from France to the United States 1779-83. Ranks third in number of inhabitants of Pennsylvania counties. Along either bank of the Susquehanna, a broad and shallow river, lie rich, fertile, alluvial bottom lands, mostly well cultivated; bounding them are ranges of hills and mountains 1200-1600 feet above sea level; other mountains in the northwest of the county attain an altitude of 2200 feet. In the northeast lies the historic Wyoming Valley, Indian name, Maughwauwama, or large plains, a long, oval basin from Campbell's Ledge to Nanticoke Falls, some sixteen miles in length, with an average breadth of three miles.

Luzerne County lies within the limits of the Connecticut Charter, granted in 1662, and within the limits of the Pennsylvania Charter granted in 1681; this double ownership caused much contention in later years, finally the Susquehanna Company of Connecticut was victorious; settlers now came rapidly, and by 1778 were distributed in several villages, with schools, churches, and all the characteristics of New England orderliness and thrift, enthusiasm and devoted patriotism. The British leader, Colonel John Butler, saw that this settlement was exposed in position, and that they had sent the best part of their militia to serve in Washington's army, so with a company of his own rangers, a regiment of Johnson's Greens, and a band of Indians, in all about 1200 men, he took the warpath from Niagara; they journeyed down the Susquehanna in bark canoes, landed above the settlement, and began their work of murder and plunder, harrowing incidents are made known by Campbell in his "Gertrude of Wyoming." The women and children were placed in the fort. At the junction of Fort and River Streets, in the borough of FORTY FORT; a conglomerate boulder with bronze tablet, marks the site of "Forty Fort," erected by the Connecticut settlers in 1772. From this fort, on July 3, 1778, the Wyoming Militia, numbering about 300, mostly old men and boys, marched forth to oppose the invading British troops and Indians, fight the Battle of Wyoming, and meet with complete defeat and atrocious massacre, in which the British officers were unable to set any bounds in the butchery of their savage allies; next day the fort was taken; the Indians burned all the houses; the inhabitants fled to the woods, and the valley was abandoned; a hundred women and children perished of fatigue and starvation. On Wyoming Avenue in the borough of Wyoming is the "Wyoming Monument," marking the burial place of many of the patriots who were slain in the battle and massacre; dedicated July, 1846.