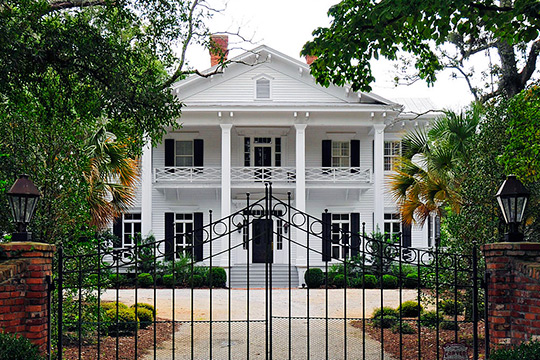 The City of Aiken is situated on a sandy ridge surrounded by pine forests in the southwestern section of the State. Its location gives it the mild, dry climate and sandy soil which made it famous first as a health resort and later as a winter playground of wealthy, northern horse and sports enthusiasts.

When the City was laid out ca. 1833, the far-sighted planners, Andrew Dexter and C.O. Pascalis, divided the streets with wide medians. Once used to graze cattle, these medians were later planted with trees and shrubs and are a defining characteristic of the area. The park-like medians were one of the features that attracted winter residents to Aiken and they favored constructing or renting homes along the wide, shady streets.

The unique, southwestern section of the City includes large estates located along tree-lined roads which have never been paved in deference to the horses which are so important to the Winter Colony. Also found in this section of the City are 2 golf courses, polo fields and Hitchcock Woods. The Woods is comprised of 1,400 acres of fields and pine forests laced with bridle paths and drag lines.

The City contains many structures which were constructed or renovated between ca. 1880 and ca. 1948. They range from modest, one-story cottages to large two- and three-story mansions and are constructed of both masonry and wood. Many of the properties include stables and other outbuildings which contribute to the historical and visual quality of the area. Plain and serpentine brick walls or high wooden fences surround many of the properties. Many of the architectural styles fashionable during the Winter Colony hey-dey include Georgian Revival, Shingle, Queen Anne and Second Empire styles. Aiken is home to the works of a number of prominent architects including Willis Irvin, Scroggs and Ewing, Thomas Hastings and Julian Peabody.

From the 1880s to about 1940 Aiken enjoyed an international reputation as a sporting resort. It offered a mild climate and excellent facilities for horse training and racing as well as polo, golf and other outdoor activities. Aiken's popularity as a winter resort began about 1880 under the patronage of Louise Eustis Hitchcock and continues to the present; however, the construction of the Aiken Mile Track in 1936 and the Aiken Training Track in 1941, lent a new dimension to Aiken's reputation as a winter resort. For the first time, high quality training facilities were available to accommodate larger numbers of trainers and horses. The tracks were instrumental in carrying Aiken's horse industry through the lean years of the Depression and World War II and in giving the industry permanence not dependent on individual winter colonists.

As early as the 1830s Aiken was known as a summer resort for Low country planters because of clear, dry, malaria-free climate and its excellent supply of drinking water at Coker Springs. About this same time Aiken enjoyed a reputation as a place of retreat for consumptives and other invalids who came to recuperate in the mild, dry climate. In 1851, the Boston Medical and Surgical Journal featured an article extolling the virtues of Aiken as a winter resort for northern invalids. Among other things the article noted that "owing to its having been a place of resort for some years, there have sprung up in it many ... accommodations and conveniences of life ... one can employ there many of the northern comforts of a home amid the southern climate.

After the Civil War, Aiken was not beaten and the town fathers began immediately to try to attract visitors and permanent residents to Aiken. Aiken was once more touted as the ideal recuperation spot for those in frail health.

About 1872, Miss Celestine Eustis of New Orleans began to winter in Aiken, believing it to be healthy for her niece and ward, Louise Eustis. An avid, horsewoman, Louise Eustis came to love Aiken as a place where equestrian activities could be comfortably pursued during the winter months She was also a strong advocate of the simple, even spartan, healthy lifestyle which she found in Aiken.

After Louise Eustis married, she convinced her husband, wealthy society sportsman, Thomas Hitchcock of New York, to continue wintering in Aiken ideal for horse and other sports and with Mrs. Hitchcock played a major role in Aiken's transition from a healthy resort to a winter pleasure resort. Along with Miss Eustis, the Hitchcocks encouraged their friends and family to spend the season in Aiken thus forming the nucleus of healthy, wealthy, northern sports enthusiasts that became known as the Aiken Winter Colony. Winter residents of Aiken included such well-known names as Eugene Grace, president of Bethlehem Steel, Oliver Iselit the great yachtsman, Allan Pinkerton of the detective agency family, George Mead of the Mead Paper Co., and Evelyn Walsh McLean, owner of the Hope Diamond.

As the circle of wealthy northerners who flocked to Aiken each winter grew, facilities for their accommodation and entertainment were established. Sporting interest in Aiken lay primarily in equestrian activities. William C. Whitney, who renovated and enlarged Mrs. Joye's boarding house into a spectacular mansion he called Joye Cottage along with Mr. and Mrs. Hitchcock, was instrumental in establishing many of the horse facilities in Aiken.

The architecture associated with the Aiken Winter Colony ranges from small cottages to enormous mansions and also includes sports facilities such as court buildings and stables. Because most of the winter residents came from wealthy cosmopolitan backgrounds, the buildings they commissioned and the renovations they undertook are for the most part stylistically sophisticated, elegant properties that distinguish Aiken from other parts of the state.