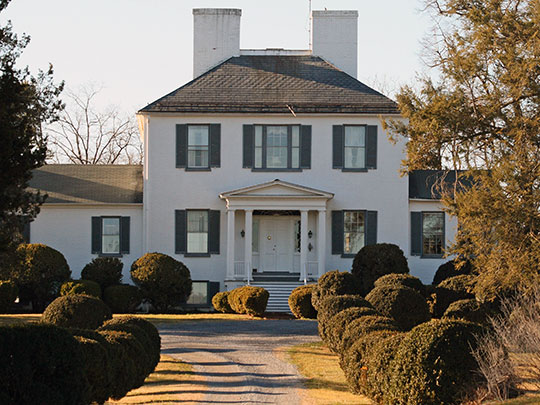 Charles Town was laid out in 1786 by Charles Washington, who donated the four corner lots at the intersection of George and Washington Streets for public buildings of the town and county. Charles died sometime between July and September, 1799, only a short while before the death of his brother, George.

Charles Town is the county seat of Jefferson County, West Virginia, and with a population of some 3,122 persons, is the largest town in the county. It is located along Evitts Run of the Shenandoah River, about ten miles west of Bloomery and ten miles south of the Potomac River at Harpers Ferry. A growing bedroom community for Metropolitan Washington, D.C., about 70 miles away, Charles Town is served by a commuter rail line to the nation's capital, U.S. Route 340, and State Routes 9 and 51.

Downtown Charles Town includes most of the commercial portions of the community. Old Charles Town surrounds this district on three sides and contains a few of the surviving dwellings that were present in the area before Charles Washington laid out his town on eighty acres in 1786. Charles Town has the highest elevation of any town in Jefferson County. At the time of the town's founding, the place was already a crossroads and featured a mill along the run, and a few inns and ordinaries along what became West and Washington streets, close to the racetrack in a nearby field.

As originally laid out, the town included 160 half-acre lots on three long streets running on a southwest to a northeast axis, intersected by nine shorter perpendicular streets. Four lots at the intersection of George and Washington streets were dedicated to public use. Water Street, North Street, and Washington Street are the oldest streets. They predate the founding of Charles Town, and so do some of the structures there. Water Street, perpendicular to West Washington Street, and closest to Evitts Run, is the oldest street of all. From Congress Street it slopes gently down to West Washington. Mature trees shade a row of modest Georgian and Federal homes built of logs or bricks that resemble but predate the ubiquitous I-house and Side Hallway forms that dominate Old Charles Town's modest architecture.

There are geographic ironies in this small, southern community. Two different societies coexisted on this patch of ground. Very little distance separates the most grand home in the district from the most modest. The owner of the largest home was the prosecutor of John Brown, whose failed rebellion was an attempt to liberate those who lived in the smallest homes just a few blocks away. As an old southern town whose culture and experience are based in the slave-holding values of the South, it is perhaps surprising that census records indicate that several of Charles Town's streets have always been racially integrated, most notably Liberty Street and North Street.