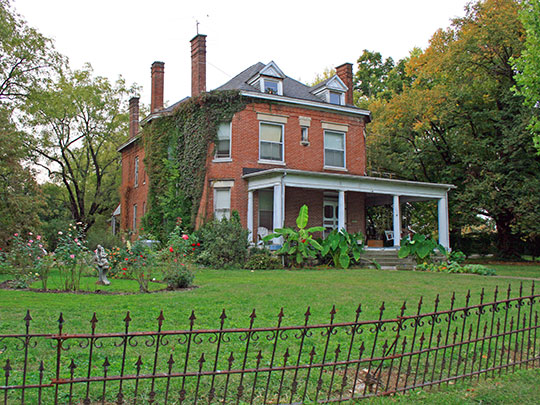 Among the hills of Nelson County is a stately old town with magnificent trees bordering broad streets on which are numerous houses in the late Georgian, Colonial Revival and Greek Revival styles. First known as Salem, Bardstown was renamed for William Baird (or Bard) of Pennsylvania, one of the owners of the 100 acre tract on which the town was laid out. It was incorporated by the Virginia Legislature November 4, 1778, and in its your rivalled Louisville and Lexington as a center of social and educational activities. Salem Academy was founded here in 1788 by James Priestly. Nazareth Academy for girls was founded near Bardstown in the early part of the 19th century; St. Joseph's College, a school for boys, founded in 1819, attained a high reputation.

A doubtful legend, cherished by the citizens, is that Louis Philippe, Duke of Orleans, later King of France, was a resident of the little town for a time, during which he taught French and dancing to the children of the gentry and worked at a watchmaker's trade. Louis Philippe and two brothers, on their way from the capital to New Orleans, crossed the Salt River at Pitts Fork with difficulty on October 16, 1797, and spent the night at Captain Bean's tavern here. Though the Duke became very ill, he was left alone because the first company of stage troupers had come to town—an event causing great excitement.