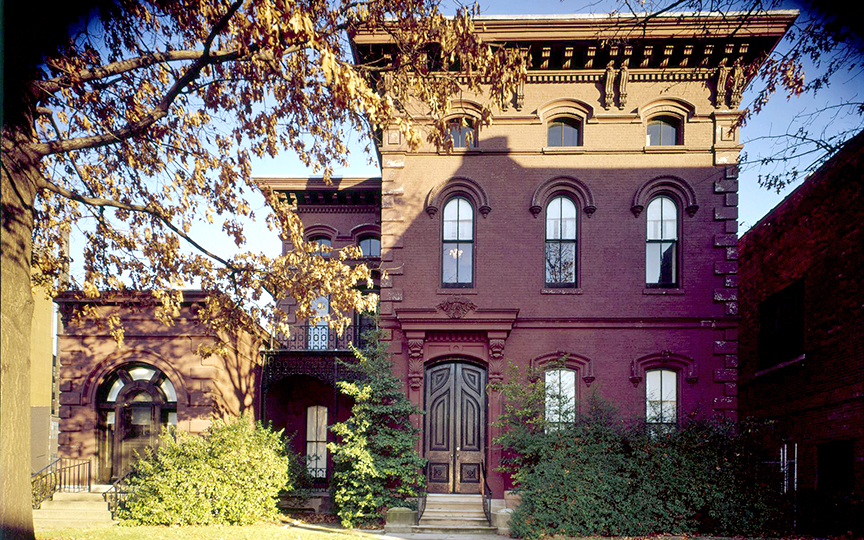 Louisville [1] lies across the Ohio River from New Albany and Jeffersonville, Indiana, on a low, level plain that curves for 8 miles along the river. Midway in the adjoining river are the Falls of the Ohio, which determined the location of the original settlement and provided it with a name (Falls of the Ohio) until, as a gesture of gratitude for the aid given by Louis XVI and the French Nation to the American Revolution, the name was changed to Louisville.

The Ohio River played a vital part in the development of Louisville and the surrounding country. The French were the first to explore the river the called La Belle Riviere (the beautiful river). During the next 100 years a long line of adventurers, explorers, traders and surveyors saw the Falls of the Ohio, stopped here for a time, and passed on.

In 1773, after England had won the Ohio Valley from France, the first permanent settlement was attempted at the falls. In the summer of that year Captain Thomas Bullitt, commissioned by Lord Dunmore, Governor of Virginia, to locate land warrants granted to Virginia soldiers of the French and Indian War, camped on the Ohio River shore. He surveyed 2,000 acres for which Dr. John Connolly, a native of Pennsylvania who had served in the war, received a patent from the British Crown. Colonel John Campbell became a joint owner of the land with Dr. Connolly, and they issued proposals for the sale of lots. Before they could establish settlers here, Connolly was charged with being a Tory and his land was confiscated by Virginia.

In May 1778, young George Rogers Clark, with 150 volunteer soldiers and about 20 families, left the Redstone settlement (Brownsville, Pennsylvania) on the Monongahela River and came down the Ohio River. His purpose was to establish a military base along the lower Ohio before starting his campaign for the conquest of the Old Northwest, then held by the British. When the party reached the falls they landed on an island, long since swept away by the floods, where they built blockhouses and planted corn; Clark and his raw recruits then pushed on into the wilderness to capture the British posts at Kaskaskia, Cahokia, and Vincennes. In the fall, Clark sent some of his men back to the settlement to establish a fort on the mainland. This fort, built during the winter of 1778-1779, became the nucleus of the settlement and headquarters of General Clark until Fort Nelson was completed in 1782. The falls, which interrupted navigation except in periods of high water, determined the site of the settlement. Downstream boats had to be piloted, and upstream boats towed by men familiar with the dangerous rapids.

The first court convened here on March 7, 1781, and one of its first official acts was to fix the charges of the "necessities of life." These included whiskey, which could not be sold for more than $15 a half-pint, and shelled corn, not to sell for more than $10 a gallon. A man might object if a hotel keeper charged him more than $18 a day for board or more than $6 a night for a feather bed; the stabling of his horse was not to exceed $4 a night. These prices were computed in terms of the depreciated Continental currency.

With the westward expansion Louisville assumed the character of a commercial city. At the opening of the new century it had 600 people, and soon it had sanitary laws as well as police and fire protection.

The New Madrid earthquake of 1811-1812, which shook the greater part of the continent, and formed Reelfoot Lake, rocked Louisville. The first shock, lasting 4 minutes, was felt here on December 16, 1811 at 2 p.m. It was accompanied by thunder and was followed by "complete darkness and saturation of the atmosphere with sulphuric vapor." 87 shocks occurred during the following week and temblors continued through part of 1812. One very frightened and pertinent person rushed in on a group of card players, exclaiming, "Gentlemen, how can you be engaged in this way when the world is so near the end?" The party rushed into the street, where, from the rocking earth, the stars seemed to be falling. A member of the group was constrained to remark, "What a pity that so beautiful a world should thus be destroyed." Public morals improved noticeably during this period.

The steamboat New Orleans, first successful steamer on the Ohio and Mississippi Rivers, stopped at Louisville on its way to Natchez in October 1811. Latrobe describes the occasion in his Rambler in America:

Late at night on the 4th day after quitting Pittsburgh, they arrived in safety at Louisville, having been but 70 hours in descending upwards of 700 miles ... and it is related that on the unexpected arrival of the boat before Louisville, in the course of a fine, still, moonlit night, the extraordinary sound which filled the air, as the pent-up steam was suffered to escape from the valves on rounding to, produced a general alarm, and multitudes rose from their beds to ascertain the cause. I have heard that the general impression among the Kentuckians was that a comet had fallen into the Ohio.

This trip inaugurated the steamboat era, which vitally affected Louisville. In 1815 the Enterprise steamed upriver from New Orleans to Louisville in 12 days, less than half the time it tool broadhorns and keel-boats to make the journey downstream. Talk revived about building a canal around the falls in front of Louisville.

From 1820 to 1870 this river town's prosperity was measured by its boat traffic. During the first 3 decades of the 19th century portaging cargoes around the Falls of the Ohio was Louisville's chief concern. Shipments were unloaded, carted overland to Towhead Island above the falls, and put on boats for the upriver journey. Except in periods of high water, when the falls were navigable, the same transfer of goods took place in moving cargoes downstream.

In 1825 a private company was organized to construct the long-deferred canal project, and in December 1830, the Uncas passed through the locks of the completed Portland Canal, which ran laterally across Louisville's riverfront. The canal opened through navigation on the Ohio from Pittsburgh to its mouth. The movement of commerce picked up. Less than a decade after it was completed, 1,500 steamers and 500 flatboats and keel-boats entered the canal annually, bearing 300,000 tons of produce for Southern markets.

Louisville was incorporated in 1828 and received its first city charter. The makeshift village government was superseded by a mayor and a board of aldermen elected by the voters. The loss of the portage business following the opening of the Portland canal brought on a temporary local depression, made more acute by the cholera epidemic of 1831.

Louisville in its early years drew its population mostly from Virginia, Maryland, North Carolina and South Carolina. Louisville early became outstation in the expanding New Orleans commercial empire. Men of wealth, character and influence came up from the city, entered the Louisville scene, and left the imprint of their early training and social environment.

By way of Pittsburgh and down the Ohio came another, larger stream of men seeking their fortunes in expanding the West. Among them were New Englanders and people from the Middle Atlantic States. This group added materially to the business caution of the roaring river town and much to its diversity of opinion. Their active participation in political life explains the fact that Louisville, a Southern city, was vocally Northern during the War between the States.

During these first few decades, Louisville was influenced by a number of French emigres. Michel Lacassagne, the first postmaster, reproduced a French garden at his home on the riverfront; Tarascon built mills and utilized the water of the falls; Audubon painted birds and taught drawing; the young Duke of Orleans, afterwards Louis Philippe, King of France, was among the first musicians of the city; the Barbaroux brought mercantile and manufacturing skill; the Berthouds and Honores, like Tardiveau, were pioneers in navigation and commerce. Some traces long remained of their architectural contributions. Tradition remembers their graceful living and dancing feet.

The 1840s started off with a fire that burned a large part of the business district. It was rebuilt, and the town continued to grow. In this decade many Germans came to Louisville. They brought little of tangible wealth but much practical education and industrial skill. They founded stores and industries, and in time exercised a definite influence upon the social and commercial life of the community.

The 1850s were years of general prosperity, and Louisville inaugurated street railways and witnessed the completion in 1851 of the Louisville, Frankfort & Lexington Railroad. The Louisville & Nashville Railroad, actively promoted by Louisville, was completed to Nashville in 1850.

The outbreak of the War between the States brought a bitter division of opinion in Louisville. The predominant Union sentiment within the city vied with the pro-Confederate temper of the adjoining rural section. Many residents with Southern sympathies were compelled to espouse the cause of the Union as a matter of self-preservation. Louisville was military headquarters and supply depot for the Armies of the North throughout the war.

The end of the conflict found the South's traditional plantation economy bankrupt. Louisville, one of the most important distributing centers for the Southern States, had to adjust to changed conditions. It pressed new merchandising methods and established railroad connections with Memphis, New Orleans, Mobile, Atlanta and other Southern cities. Louisville merchants send salesmen in two-horse rigs to all parts of the South with instructions to get orders at any cost. For two decades Louisville and Cincinnati waged an intense struggle for Southern trade. Eventually it was divided between them.