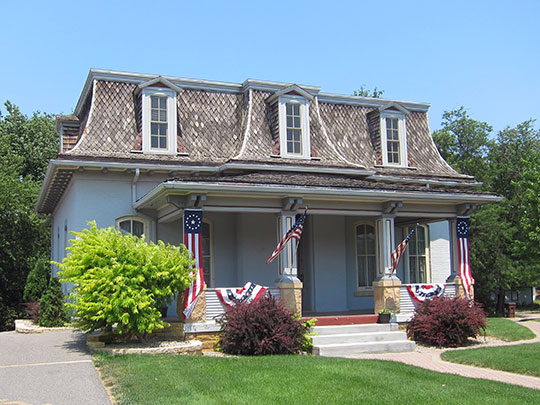 Mankato is located at a large bend in the Minnesota River at its junction with the Blue Earth River, one of the Minnesota's major tributaries which drains a large portion of southern Minnesota. The site's location at the junction of two river systems made it an important trade center and meeting place for Native Americans, and a convenient site for early Euro-American traders to meet with Native American groups.

Euro-American settlement of the site (and of present-day Blue Earth County) began in the spring of 1852 when P. K. Johnson and Henry Jackson located claims there. The pair was representing the Mankato Claim Company, a townsite speculative venture which had been formed by ten men in St. Paul in February of 1852. The townsite company hoped to exploit the site's geographic location as the southernmost point on the Minnesota River, which in the 1850s had become one of southern Minnesota's most important transportation systems. Mankato was seen as a potential gateway to the settlement of southern and south-central Minnesota and northern Iowa. The group named the site after the writings of explorer Joseph Nicollet who used the term "Mah-ka-to," the Dakota name for the Blue Earth River. The Mankato Claim Company surveyed and platted an ambitious 600-acre townsite in May of 1852 which was reduced to 320 acres when the plat was filed later that month. The company invested in the construction of the village's first hotel in 1853. Military roads connected Mankato with Mendota and with Read's Landing at Lake Pepin in 1853. The Blue Earth County government was organized in March of 1853 and Mankato was chosen as the county seat later that year.

The townsite company's goals were realized in the 1850s and 1860s as Mankato served as the southernmost port on the Minnesota River during the river's brief existence as a steamboat route. Steamboats from St. Paul began docking at Mankato as early as 1852. There were 310 steamboat arrivals in 1858, the local industry's peak year. Real estate speculation in Mankato was rampant during these years, particularly before the crash of 1857. While steamboats shipped immigrants, mail, and manufactured goods more rapidly than they could be hauled to Mankato by wagon over crude roads, the steamboating season was short because the river was often too shallow to be navigated. When railroads began serving Mankato in 1868, at least two railroad companies extended their service beyond Mankato by sponsoring steamboat runs to New Ulm and Redwood Falls between circa 1868 and circa 1872. Steamboat lines rapidly lost customers to the year-round efficiency of railroads, and by about 1875 steamboats travelled to Mankato only occasionally.

Despite the asset of its river port, Mankato grew relatively slowly in the 1850s and the 1860s. The Civil War, in which thousands of Minnesota men fought in 1861-1865, drained southern Minnesota's settlement movement of resources and would-be pioneers. In addition, while the Dakota Indians ceded southern Minnesota to the U.S. Government in 1851, these treaties were not ratified by Congress until 1852 and Blue Earth County was not surveyed by the federal government until 1855. The forced removal of the Dakota from southern Minnesota and the poor implementation of treaty stipulations resulted in unsettled and sometimes violent relations between Euro-Americans and the Dakota which culminated in the U.S. Government-Dakota Conflict of 1862. The conflict climaxed locally in the execution of 38 Dakota in Mankato on December 26, 1862, the largest mass execution in U.S. history. At least two men who later lived in the Lincoln Park neighborhood played roles in the event: U.S. Senator Morton S. Wilkinson urged both Congress and President Lincoln to approve the execution of the Dakota men, and General James H. Baker, Colonel of the 10th regiment, commanded 325 of the 1,400 soldiers who maintained order during the heavily-attended hanging.

After the Civil War, more farmers began to move into southern Minnesota and Mankato grew more rapidly. Local wheat buyers gathered the crop of southern Minnesota and shipped it on to larger markets. In January of 1869, for example, there were 90,000 bushels of wheat marketed at Mankato. During this period, Mankato was incorporated as a village in 1865 and as a city in 1868. The town's first large bank, J. J. Thorton and Co, was established in 1865. Among the four organizers of the bank was Morton S. Wilkinson who lived in Lincoln Park beginning about 1870. The bank was reorganized as the First National Bank in 1868, the same year that Mankato's first Board of Trade was organized.