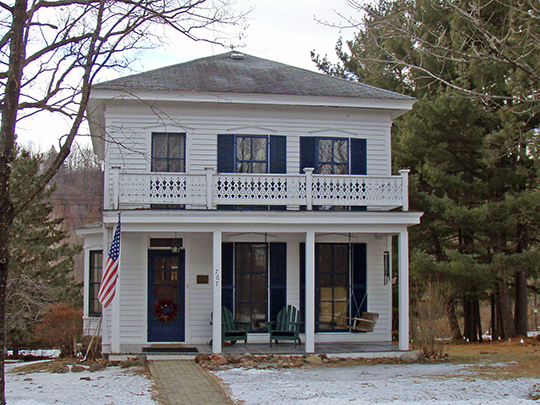 The area now known as Chisago County was derived by early settlers from the Indian word Ki-Chi-Saga which means "fair and lovely waters." In the early 1800s, the area was a vast area of forests, lakes, wetlands, and prairies. The Chippewa people were the primary residents. However, in accordance with an 1837 treaty, the Chippewa moved out of the area and an influx of European-American settlers arrived. Chisago County was organized in 1851. Logging became the key industry in the area. Sawmills developed in Taylors Falls, Sunrise, and Kost, but by 1914, most of the forests had been cleared and the logging industry declined. Agriculture then became the dominant industry.

Today, agriculture is still the primary land use in the county, but the county is rapidly changing. It is one of the fastest growing non-metropolitan counties in Minnesota, in part, because of its proximity and accessibility to the Minneapolis/Saint Paul metropolitan area and, in part, because of the attraction of its abundant natural amenities. While much has changed over the years, Chisago County is still known for its natural amenities — its rivers, lakes, wetlands, and forests.

Sieur duLuth, a French Canadian, was the first known white man to enter Chisago County in his travels down the St. Croix River in 1679. During the next one hundred years the French and English established trading posts at what are now known as Taylors Falls and Sunrise.

The 1837 treaty in which the Ojibway and Dakota Indians ceded all lands between the St. Croix and Mississippi Rivers opened the Chisago County area to settlement by the white man. In 1837 as well, a man named Jesse Taylor arrived in the location that would later bear his name, Taylors Falls. The first steamboats arrived at Taylors Falls a year later in 1838.

During the remaining decades of the century, logging became the key industry in the Chisago County area. There were mills in Taylors Falls, Sunrise and Kost. Transporting the logs down the river to the mills caused navigational difficulty with the steamboats coming up river, as well as causing erosion to the banks of the rivers and numerous log jams. Nevers Dam, the largest wooden dam ever built, began operation in 1890 and controlled the flow of logs down the river until 1912.

In 1848, the Chisago Lakes Area (Chisago City, Lindstrom and Center City) was surveyed for the federal government. The County was officially founded in 1851, and Taylors Falls became the first county seat. The first mail delivery to Taylors Falls took place in 1851.

In 1853, the road from Stillwater to Taylors Falls was completed, and a stage run opened. The first bridge to cross the St. Croix River was completed at Taylors Falls in 1856. Ferry boats crossed the St. Croix River at Sunrise and Rush City. In 1868, the military road, which traversed the entire County from north to south was opened. Railroads followed as an important method of transportation. The St. Paul-Duluth Railroad, which crossed the County from north to south, was completed in 1870.

Although there were at one time 62 school districts in the County, today there are only seven. Agriculture was and still is to a large degree, the prime industry in the County, with livestock, row crops, vegetables and turf being the primary activities. One of the largest potato equipment manufacturers of its time, the Splittstoser Company, was based in North Branch. Many creameries were opened in the County to serve the dairy herds. Today, beef cattle have replaced many of the dairy herds.

The Swedes and other Scandinavian ethnic groups are the most known settlers in Chisago County; however, the Germans, French, English and other groups helped to develop the County as well.