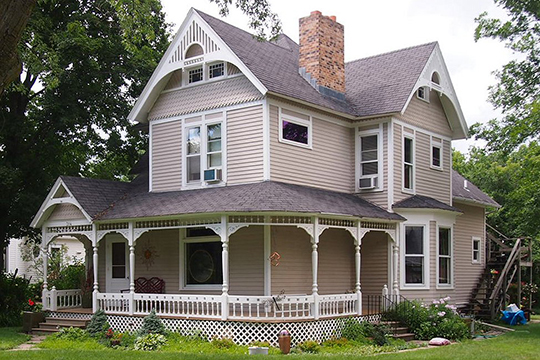 Established March 5, 1853, Goodhue County was named in honor of James Madison Goodhue, who was the first printer and editor in Minnesota, beginning the issue of the Minnesota Pioneer on April 28, 1849. He was born in Hebron, New Hampshire, March 31, 1810, and died in St. Paul, August 27, 1852; was graduated at Amherst College in 1833; studied law in New York City, and was admitted to the bar about 1840; afterward was a farmer three years in Plainfield; practiced law in Galesburg,, and in Platteville and Lancaster, Wisconsin; became editor of the Wisconsin Herald, published in Lancaster; removed to St. Paul in the spring of 1849, and was a most earnest and influential journalist here during the three remaining years of his life.

Goodhue was a man of very forcible character and of high moral principles. As a vigorous writer, he did much to build up St. Paul and Minnesota, and made strong personal friends and enemies. Because of his scathing editorial against the U. S. Marshal, Alexander Mitchell, and Judge David Cooper, a brother of the latter attacked Mr. Goodhue, January 15, 1851, on the street in front of the building in which the legislature was in session, and stabbed him twice, severely wounding him, and being shot in return. From that injury he never fully recovered.