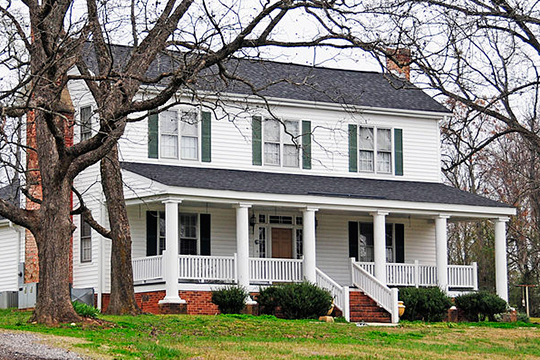 Union, the county seat, was surveyed prior to 1787 and was originally named Union Court House; it was subsequently named Unionville, a name which persisted into the late nineteenth century. A 1787 plat shows a courthouse and jail, and street names include Mountain, Grog, Judgment, Virgin, Batchler, Farr, and Union streets, of which only the name Mountain survives today. When the county became Union District in 1800 Unionville became its seat.

By 1826 Unionville boasted a population of two hundred, with about twenty houses, and Robert Mills noted in his Statistics of South Carolina that the town had a "handsome courthouse and jail, upon the most improved plan, having been lately erected here" and a "respectable academy and a Presbyterian Church." The fourth county courthouse and the jail were built under his supervision in 1825 and 1823, respectively; the jail was listed in the National Register in 1974. Unionville was incorporated in December 1837 with town limits extending one-half mile in each direction from the courthouse. The town had a mayor and four wardens, with provisions for "patrol duty" and road maintenance.

Unionville served as a crossroads near the Broad and Tyger Rivers on the roads from Spartanburg to Chester. Many local farmers and planters shipped wagonloads of cotton, the most commonly-grown crop in the area, through the town. The growth of up-country cotton from 1800 to 1860, and the resulting growth of slavery, changed both the economy and society of Unionville and Union District. The district's population grew rapidly, to almost 20,000 by 1850 (of which over half were slaves), while the town's population grew more slowly, to an antebellum high of 554 in the same year. Other products, in addition to cotton, included corn, grains, and livestock.

The town developed gradually in the thirty years immediately before the Civil War and was well established by 1850. The Union Times was first published that year, followed by the creation of a post office in 1851. The Southern Business Directory for 1854 listed fifteen businesses in Unionville, which included a hotel, several doctors' and lawyers' offices, and such businesses as saddle, jewelry, shoe and boot, and carriage shops. The Spartanburg and Union Railroad was chartered in the early 1850s, with local merchant John L. Young as president; its completion in 1859 joined Charleston and Spartanburg by rail and provided Unionville with its first railroad.

There was little or no direct impact on the town as a result of the Civil War until its final days, when the remnants of both the South Carolina and Confederate governments came to Unionville. In February 1865, a few days after Columbia and Charleston fell to advancing Federal armies, Governor Andrew G. Magrath moved the state government to the town. He established his headquarters in the Thomas N. Dawkins House, which was individually listed in the National Register in 1973. President Jefferson Davis, accompanied by several members of the Confederate cabinet and a small military escort, left Richmond after it fell in early April and made his way south through Virginia and North Carolina. The refugee "government" reached Unionville by the end of the month and had a meal at the William H. Wallace House. Wallace, who served throughout the war in Virginia, rose to the rank of general and surrendered at Appomattox.

The most significant result of the war, in Union as everywhere else throughout the South, was emancipation and its resulting disruption. The long process of rebuilding would be made more difficult by two major developments—the end of the cotton-based plantation system and the influx of thousands of newly-freed blacks into an economy and a society which had little room for competition. Many of the larger plantations and farms were gone, and many blacks bought or rented land from their former masters. Some of the plantations were operated as units, with blacks working for wages, which could mean a share of the crop, or services, or cash, or some combination of the three. Most of the plantations switched to cash payments as soon as possible after 1865. Though the cotton plantation system was gone, cotton was still the preferred crop, particularly in the South Carolina upcountry. In many instances farmers began to specialize and excluded. Those subsistence crops such as corn which had been common before 1860; they based their success or failure solely on cotton. In addition, small farmers in the postwar era increased cotton production. South Carolina produced 45 percent more in 1880 than it had in 1860. Union farmers, like many others in the South Carolina upcountry, grew more cotton, of better quality, and commanding better prices than the low country produced after the Civil War, just as they had before it.

In June 1877 a devastating fire, the worst in Union history, destroyed twenty-four buildings on both sides of Main Street, including the railroad station. The great extent of the damage was due both to Union's lack of a fire department and to the scarcity of brick buildings there. Most commercial buildings constructed during the economic boom of the 1870s were wooden and generally roofed with cedar shingles. The fire helped to spur brick construction in the town; by October 1877 the Weekly Union Times reported that ten large brick buildings and three small ones were in various stages of construction. A new brick railroad depot, for example, was built soon after the fire, and served for several years as both a passenger and freight depot. It is a key property in the Union Downtown Historic District.

Union grew slowly in both size and population until the last decade of the nineteenth century. The 1880-1881 South Carolina State Gazetteer and Business Directory described it as a "prosperous town of 1,000 inhabitants" with five churches, a bank, telegraph office, several grist and saw mills, and male and female academies. The directory also noted that Union "ships some 8,000 bales of cotton annually," a reference to the major crop of the county. In 1889 the Union Cotton Oil Mill Company was established to gin cotton and produce oil from the seeds, and also to sell feed and fertilizer. It is a key property in the Union Downtown Historic District, included in this multiple property submission.

The impact of the textile industry on Union after 1890, utilizing cotton from local farms and creating jobs in the local mills, was enormous. Thomas Carey Duncan, the area's most prominent entrepreneur and textile industrialist, founded Union Cotton Mill in 1893. The mill boasted a clock tower, over 12,000 spindles and over three hundred looms, and electric light; it shipped its first finished cloth in May 1894. Duncan planned a second mill (named Union Cotton Mill Number Two) as early as 1894; it was completed by 1896 and boasted over 73,000 spindles, and claimed to be the largest cotton mill in the South. By 1902 Union had six cotton manufacturing plants, which consumed about 60,000 bales of cotton a year.

Union's population grew dramatically during the first decade of the textile industry there, from 1,609 in 1890 to 5,400 in 1900. Only Greenwood, among South Carolina towns, had a faster growth rate in the 1890s. The commercial district grew as well. In 1894 the town boasted "thirty-six brick stores, two banks, an opera house, a three-story brick hotel (the Union Hotel), a printing office ... three livery stables, two beef markets, and a buggy and wagon factory" in addition to the cotton mill and the cotton oil mill.

There were many public improvements made in Union in the early twentieth century. Major improvements included a new city hall, built in 1901, and the Union Carnegie Free Library, the first of fifteen Carnegie libraries in the state' built in 1905. The library is a key property in the South Street Historic District, listed in the National Register in 1983. Union was rechartered in 1907 and by 1911 it was known as the "City of Spindles", one of the growing cities at the center of the textile industry in the South Carolina piedmont. The town had come a long way from 1893, when it was viewed as "a little hamlet, as sweetly bound in slumber and quiet as the weariest world-sick, worn out individual could wish." A new brick post office was completed in 1912; it is a key property in the Union Downtown Historic District, included in this multiple property submission. A new courthouse was completed in 1913; it is also a key property in the Union Downtown Historic District. It replaced the 1825 courthouse designed by Robert Mills, which was demolished.

The town continued to grow steadily into the 1920s. The 1920-1921 city directory listed five large cotton and knitting mills, two hosiery mills, a cotton oil mill, a ginnery, an ice factory, five banks, two newspapers, thirteen churches, a city government, an active Chamber of Commerce, and two railroad lines. The five-story Hotel Fairforest was built from 1924 to 1926; it was listed in the National Register in 1984. By 1927 Union had a population of 6,141, and with the suburbs included its population was almost 11,000.

Significant trends in the textile industry throughout the 1920s had a great impact on union economy and society. The county ranked fourth in South Carolina textile production in 1920, with over 300,000 spindles. Union Cotton Mill and Union Cotton Mill Number Two combined for nearly 90,000 spindles. Cotton prices, however, had dropped drastically in 1919, and the introduction of the boll weevil further crippled production in the county, which fell over 20 percent from 1919 to 1924. This drop in cotton production, along with an economic recession and trends toward labor reform in the mills and mill villages, changed the face of the textile industry in Union, and indeed across the state. By the end of the decade mill workers were striking for better working and living conditions; regional strikes in the spring of 1929 included the Union mills and others in the county. The mills later went on a three-weeks-a-month work schedule as a result of the recession, and labor problems continued to plague them well into the 1930s.

The lean years of the 1930s ended a nearly forty-year period of physical and economic growth in Union. After the failure of five banks during the first years of the Depression, local merchant Harry M. Arthur opened the Arthur Depository, later known as the Arthur State Bank, in early 1933. It is a key property in the Union Downtown Historic District. The New Deal provided some jobs during this period through public works projects administered through the Civilian Conservation Corps (CCC), the Public Works Administration (IWA), and the Works Progress Administration (WPA). One of these projects included the 1938 high school next to the Main Street Grammar School/Union High School, which is a property in the East Main Street/Douglass Heights Historic District.

Union was described in 1941, at the end of this period, in the Works Progress Administration's South Carolina: A Guide To the Palmetto State:

"Union ... is pervaded by a sort of lazy atmosphere that belies the bustling activity of its factories and mills. The plain-faced shops on both sides of the narrow main street draw farmers and mill villagers for trade. The ponderous brick courthouse ... in addition to its legal functions, serves as a gathering place for farmers and mill workers when they come to town. Most of the streets ... are paved. Mountain Street and North Church Street, the latter winding crookedly across town, are said to be former Indian trails. Gadberry Street ... is still known as Poverty Flat; here the rowdiness of pre-dispensary saloons and questionable hotels made it nothing short of scandalous for 'ladies' of the community to be seen on the sidewalks. Pinckney street ... is called Wall Street, because of the little row of Negro shops. East of the railroad tracks, Main Street extends into a well-kept residential section, where the privacy of substantial houses and green-backed gardens is intensified by the shadows of oaks and magnolias.