Photo: Residences in the Eighth Avenue Historic District, Fort Worth, TX. The Historic District was listed on the National Register of Historic Places in 2006. Photographed by user:Renelibrary, 2012, (own work) [cc-by-3.0 (creativecommons.org/licenses/by/3.0)], via Wikimedia Commons, accessed September, 2012. 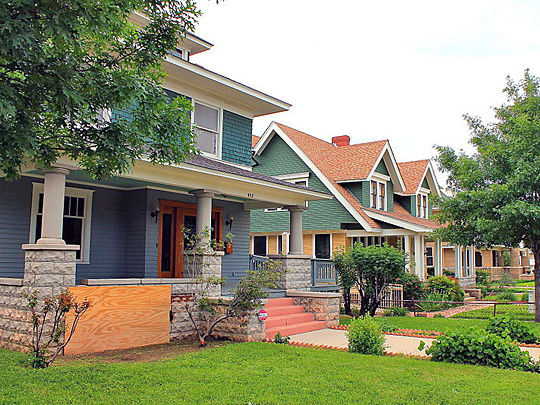 Tarrant County, with Fort Worth as its chief city, was created by act of the Legislature December 20, 1849, about a year after the establishment of the military garrison at Fort Worth. This act contains some directions as to the location of the county seat, "the place receiving the highest number of votes shall be the place established as the county seat of said county of Tarrant and shall be called Birdville." The county was organized in August, 1850, and the county offices located at Birdville, an old settlement now marked by a few weather-beaten buildings that hardly tell the story of its ambitious struggles to become a metropolis. The rivalry between Fort Worth and Birdville over the county seat was an important chapter in the early history of the county. An original election was contested and a subsequent re-vote favored Fort Worth, being closer to the center of the county.

Tarrant County until after the Civil War was on the frontier. Its settlement began under the auspices of the Peters Colony grant of 1841, and the first settlers came into Tarrant County about 1843-1844. A place known as Bird's Fort was in existence as early as 1843, and an important council with the Indian tribes was held there. The establishment about 1848 of Fort Worth and Fort Graham, the latter in Hill County, was the signal for the influx of permanent settlers.