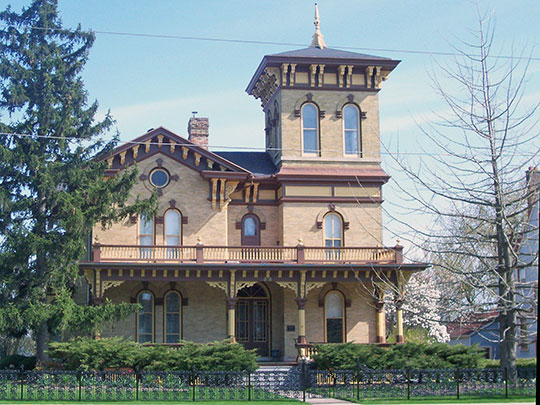 Outagamie County was officially formed on February 17, 1851 with land set apart from Brown County. Outagamie County is relatively flat and in 1850 was heavily timbered with maple, elm, ash and hickory. In 1853, the population numbered nearly 4,000 settlers, who had migrated from New England and New York. Several rivers bisect the county; the Fox River on the southeast, the Wolf River on the west and Duck Creek on the northeast. The Fox River would play an important role in the development of Appleton as a manufacturing center.

Prior to the formation of Outagamie County, Amos A. Lawrence made a generous donation of $10,000 to the Wisconsin Methodist Episcopal Conference in 1847 for the building of a university. The monies were contingent upon the Methodist Church raising a matching amount. The fund raising efforts of the church were successful and the incorporation of "The Lawrence Institute of Wisconsin" took place on January 17, 1847. The site selected for the university was nearly in the center of the Green Bay Mission District of the Methodist Church on the Fox River between Lake Winnebago and Green Bay. The land was owned by Amos A. Lawrence. The History of Northern Wisconsin, published in 1881, stated "It is doubtful whether there ever would have been an Appleton had there not been a University." Construction of the university began on July 3, 1859 with the building of the preparatory building. Prior to the establishment of the university, there had only been one settler who located in the area of what would become Appleton.

The Appleton Village Plat was laid out in 1848 by Elder Sampson, Reeder Smith, Joel S. Wright and Henry Blood. On July 16, 1851 it was decided to locate the county seat between the villages of Appleton and Grand Chute on Block 31 (which is now central Appleton).