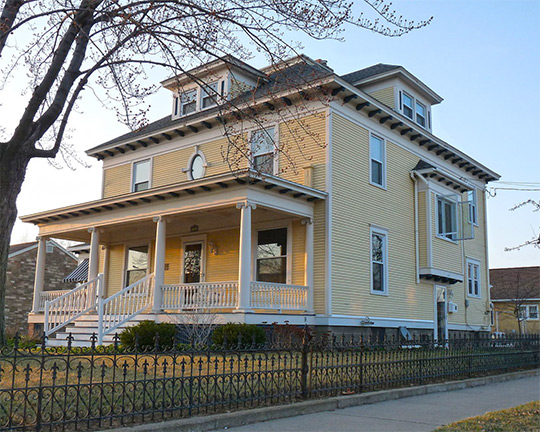 Wisconsin Rapids, seat of Wood County, through which the Wisconsin River tumbles headlong, is noisy with the brawling of water and the booming of paper mills and factories. Pulpwood logs lie jammed in a runway above the dam, over which water spills to the rocks below. The banks upstream are crowded with smoky houses and factories, but downstream they are free, with wooded parks, a public swimming pool, and streets arched over by elms. North of the bridge is the Lefebvre House, First Avenue North, an old white frame building with simple New England lines. Now a studio, it was formerly a saloon from whose willow-lined terrace people used to watch the ferry chugging across the river.

Wisconsin Rapids was once two settlements, Centralia on the west river-bank, Grand Rapids on the east. One midnight in June 1880, after the villagers had gone to bed exhausted from fighting a fire the previous night, the river began to rise rapidly and soon a flood was raging through the swamp, taking out a hundred feet of railroad bed, two bridges, embankments, barns and outhouses. Whole stores floated away on the torrent, with chicken coops, boardwalks, and desperately swimming livestock. Grand Rapids and Centralia rebuilt their houses and industries and turned from lumbering to woodworking, hardware, and pulp factories. In 1900 the two towns were consolidated under the name of Grand Rapids. Because of confusion with Grand Rapids, Michigan, the city was renamed Wisconsin Rapids in 1920. The Consolidated Water Power and Paper Company Plant, First Avenue North and Jackson Streets, has the largest of its four plants on the western side of the river.

Advertised as the "Heart of Wisconsin," Wisconsin Rapids has four railroads connecting it with Chicago, Milwaukee, Green Bay and St. Paul, hauling paper and pulp, camp equipment, dairy products, refrigeration equipment, fiber, cranberries, and boxes and cartons. Cranberries are brought in from swamps and marshes formed by old beaver dams. In the city is the Wisconsin Cranberry Sales Company, representing 90% of the State's growers. At yearly cranberry festivals, raking contests similar to corn-husking contests in other regions, are held in the marshes.