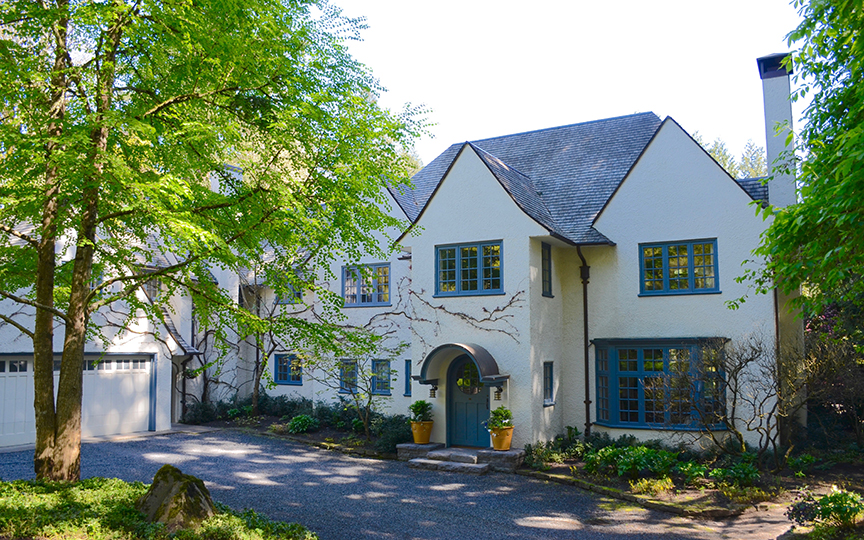 Photo: Maurice Crumpacker House is the former residence of Maurice E. Crumpacker, a popular Oregon attorney and United States Congressman in the 1920s. The house was built by Portland architect Wade Hampton Pipes ca. 1923, and is located at 12714 SW Iron Mountain Boulevard in the Dunthorpe neighborhood of Portland, Oregon. The property was listed on the National Register of Historic Places in 1992. Photographed by User:Steve Morgan (own work), 2016, via Wikimedia Commons, accessed September, 2019.

The origin of the Oregon's [†] name is unknown, but one theory holds that it may have come from the Wisconsin River, shown in a 1715 French map as "Ouaricon." In 1859, Oregon was admitted as the 33rd state to the Union. Spanish sailors in search of a northwest passage were the first Europeans to see what is known today as Oregon. Settlers traveling in wagon trains over the Oregon Trail in the 1840s followed the missionaries who had come in the 1830s.

Oregon is a state of great natural beauty with places such as Crater Lake National Park and the Columbia River Gorge. Oregon is known for its vast evergreen forests and its mountains, covered in forests, make Oregon the leading state in the production of wood products.The rugged beauty of Oregon's mountains, seacoast and forest lands attract millions of tourists every year. Majestic snow-covered Mount Hood towers above the Cascade Range about 80 kilometers east of Portland. Motorists can skirt Mount Hood and see close-up views of its glacier-clad slopes. A drive along the Oregon coastline provides dramatic views of white sand dunes, coastal lakes and bays, and cliffs rising above the shore.