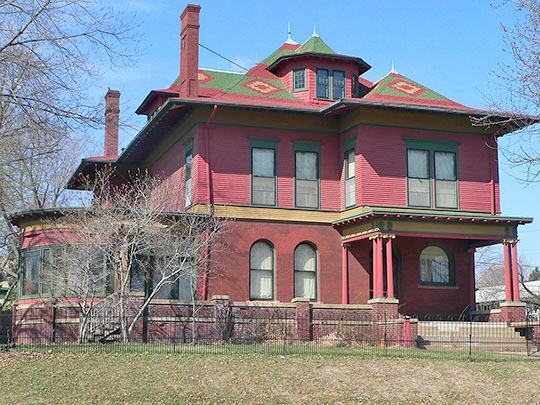 Sioux City, lying along the Big Sioux and Floyd Rivers at the point where they empty into the Missouri River, spreads over bluffs and river valley at the western boundary line where Iowa meets Nebraska and South Dakota. A seemingly endless series of bluffs enclose the smokestacks and tall buildings of the commercial district on the flats along the rivers. Homes on the bluff are almost hidden among the trees. Differing from the usual pattern of industrial towns, Sioux City does not crowd its people into tenements or apartments that elbow their neighbors beneath the shadows of smokestacks and factory buildings. Instead, there are small homes surrounded by yards where children can play, suburbs within the city that give the town the appearance of newness as well as of having enough room to grow.

The U-shaped area along the Floyd and Perry Creek valleys is occupied by the industrial and business section, with the business and civic center at the base. Spreading fan-wise from this industrial heart are the residence suburbs lining the contours of the tree-covered hills, where some of the residents can see three States from their lawns. As Pearl (Grandview Boulevard) above 8th Street), Douglas, Nebraska, and Pierce Streets push north from the river, the architectural history of the town can be traced in almost chronological sequence—simple frame houses, ornate structures with towers and cupolas, bungalows, and Colonial and English type homes. In the business district the straight lines of the newer buildings contrast sharply with the elaborate towers and turrets of the old.

The river-town heritage, the stockyards and the packing plants do much to give the town a Western atmosphere. The citizens are proud of the town's democratic spirit. Almost everyone here realizes that the prosperity of his town depends on crops and litters, since the industrial life is closely allied with the surrounding farms, and Saturdays are "slow" when the farmers are planting or harvesting.

The interest of the community for miles around centers in the livestock market and packing companies in southeastern Sioux City. Late on Sunday nights and early on Monday mornings the highways leading into the city are filled with trucks of livestock for the week's opening market. The trade territory reaches as far as Montana and includes portions of Wyoming, Colorado, North Dakota, South Dakota, Nebraska, and Minnesota. Hundreds of trucks rumble along the streets of Sioux City at all hours of the day. Truck drivers loiter about the taverns and dance halls during the evenings. Like the boat hands of the old days, they add color to night life.

According to one story, stock-trucking commenced in the early 1900s when a farmer near Sioux City loaded a cow, a calf, and four or five lusty shoats into his old farm truck and drove to the stockyards. Although the attendants joked about it, the idea caught on. Other farmers brought stock to market in their own trucks, taking back loads of feed or other merchandise on the return trip.

The growth of trucking, however, was sporadic until Iowa started to hard-surface and gravel its roads. Then double-decker stock trucks were introduced and the stockyard company established its own motor truck division.

Sioux City has dairy farms, poultry farms, livestock feeding lots, and hay and grain fields within its corporate limits. These urban farms are worked by tenants who value them highly because of their proximity to creameries, produce houses, and stockyards.

The explorers, Lewis and Clark, on their expedition up the Missouri River passed through this region in 1804. George Catlin, early painter of Indian life, described the site of Sioux City in enthusiastic terms on his return from a trip up the river in 1832. J. N. Nicollet, a geographer and scientist, also commented on the spot in 1839. The great naturalist, John James Audubon, who journeyed to Fort Union in 1843, remembered the region because he saw so many dead buffalo that had drowned while attempting to cross the thin ice above the mouth of the Big Sioux River.

In September 1848, William Thompson came from Illinois and platted the town of Thompsonville, now within the southeastern limits of Sioux City. Theophile Bruguier, a French-Canadian trader, arrived in May 1849, with his wives, their father, Chief War Eagle, and other Sioux Indians to settle along the banks of the Big Sioux at a site he said he had seen in a dream. Later in the same year Robert Perry established himself near the present Ninth Street on the creek that bears his name.

Bruguier's relationship to War Eagle and his tribe kept the Indians from seriously harassing the pioneer settlement. War Eagle indicated his attitude when he left the Santee Sioux tribe in the region of St. Paul, Minnesota, after it showed its hostility to white settlers. He joined the Yankton Sioux and was made their chief. War Eagle's friendship for the whites was so sincere that President Martin Van Buren called him to Washington in 1837 and presented him with a medal. Thus to the founders of Sioux City the Algonkian meaning of the word Sioux, "the snakelike one," or "enemies," had little significance.

Woodbury County was first called Wahkaw, but was changed to Woodbury in 1853, apparently for Judge Levi Woodbury, a former United States Senator from New Hampshire, as the Sioux City Eagle, in its first issue in 1857, stated there were more residents in Sioux City from New Hampshire than from any other State. In May 1856, by popular vote, the county seat was established at Sioux City, which had 90 buildings and about 400 people. The town was incorporated in 1857.

This was the beginning of a regular freight service between St. Louis and Sioux City, and during the 1860s there were usually four or five boats tied up at the levee discharging freight.

When settlers first poured into the Northwest, the Missouri was one of the important arteries of travel, and both overland and river travelers made Sioux City their supply base for the long trip ahead of them.