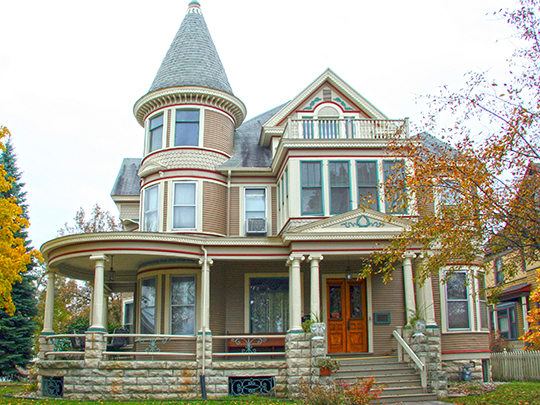 La Crosse lies in the Coulee Region, where the confluence of three rivers, the La Crosse, the Black and the Mississippi forms a natural port. From the summit of Grandad Bluff, highest of the massive crags that overlook the city and form its eastern boundary, La Crosse is seen 570 feet below on a narrow, oblong terrace, limited on the west side by the irregular shoreline of the Mississippi. On a clear day sections of three States are visible: western Wisconsin, Minnesota across the river, and Iowa 25 miles southwest.

Though 2/3rds of the people are foreign-born or have foreign-born or mixed parentage, few of the Old World customs are retained. Various racial groups maintain special religious congregations, such as the Irish, German and Bohemian Roman Catholics, the German and Norwegian Lutherans and the Syrian Greek Orthodox.

La Crosse started as a trading post in Indian territory. Here the French occasionally stopped to trade with the encamped Winnebago Indians, calling the site Prairie la Crosse for a game they saw Indians playing that reminded them of the French game la crosse. Indian trade likewise attracted the first permanent white settlers. On November 9, 1841, 18-year-old Nathan Myrick, a New Yorker, ascended the Mississippi in a government keelboat from Prairie du Chien, where he had purchased articles for trade and barter. He built a temporary shelter on Barron's Island (now Pettibone Park), but the next winter he hired H. J. B. Miller, who later became his partner, to move supplies and timber across the ice to the treeless prairie, and raised the first log hut and trading post on the present site of La Crosse. In the spring of 1844 the floated logs from the Black River pineries to La Crosse, sorted and rafted them, and sent them down river to St. Louis. The same year, Mormons settled in the fertile valley now named Mormon Coulee. Though the land was well adapted to farming, they found themselves at odds with other settlers and left the following year. When John M. Levy, a young English merchant from Prairie du Chien, disembarked with his wife from the small steamboat Berlin in 1846, "like Noah from the ark," followed by animals — "a horse, cow, dog, 2 cats, a whole family of hogs and a zip coon" — there were only a few rough claim shanties huddled on the water front, housing nine men and four women. Two years later, when the Government removed the Wennebago to Minnesota and with them the main source of the settlers' income, the settlement's white population was only 30.

The early traders exchanged blankets, trinkets, firearms and some money for the pelts which they shipped to Mississippi markets. Supplies came from Galena, Illinois, and the whistle of the approaching steamboat signalled the entire population, white and red, to hurry to the river front, bearing pails, pots and pans in which to carry home food and other provisions.

The first and largest group of settlers in the early 1850s came chiefly from New York, Ohio and Vermont. Among them were shrewd and aggressive men who quickly recognized the commercial possibilities of the site, bought up the land, erected saw and grist mills, and promoted the coming of the earliest railroads. Through their efforts Prairie la Crosse was made the county seat in 1851. The next year the first sawmill was built, the nucleus for the industry that developed the settlement for the next 40 years. The same year A. D. La Due, a printer, brought his hand press from Prairie du Chien and edited the first newspaper, Spirit of the Times, a Democratic weekly. This paper, advertising the advantages of Prairie la Crosse, was sent to friends and relatives in the East and abroad, and greatly stimulated settlement. In 1852 the first churches were organized, the Baptist and Congregational, though Episcopalians were credited with conducting the first complete religious service, and early morning communion service on Grandad Bluff.

During the 1850s many German and Norwegian immigrants, among them skilled artisans and professional men forced by the revolutions of 1848 to leave their homelands, were attracted by the extensive La Crosse and Black River pineries. Germans, the first and largest group to arrive, in 1855 organized their Turnverein, which provided facilities for physical exercises and maintained a liberal forum through which were discussed the political and economic problems of the Fatherland and the newer issues of America. The following year the La Crosse Maennerchor, a German singing society, later known as the La Cross Liederkranz, was organized. This organization also served as a social center for the Germans of the community.

In 1856 La Crosse, which had grown from a struggling frontier settlement with scarcely 100 inhabitants at the beginning of the decade to a bustling river port of 3,000, received its charter as a city, dropping "Prairie" from its name. But only the next year La Crosse experienced its first depression. Many of the pioneers had lost their farms and savings when the La Crosse and Milwaukee Railroad Company went into bankruptcy during the panic of 1857. At this time businessmen started an odd custom. Wearing high silk plug hats and Prince Albert suits, they warmly greeted newcomers who disembarked from steamboats; they sauntered around hotels and the water front, hoping by their conversation and opulent appearance to induce strangers to settle here.

In 1858, only 3 years before the Civil War, the La Crosse and Milwaukee Railroad was completed. The war closed traffic on the Mississippi River below the Ohio River, diverting it into east-west directions. Thus La Crosse, which had direct communication with the East, became the natural outlet for a large section of western Wisconsin and the Northwest seeking new markets.

As migration increased, La Crosse became the most important center between Dubuque and St. Paul for men and supplies traveling toward new frontiers. Steamboat companies opened offices here to care for the enlarged traffic. The Northwestern Union Packet Company gained control of the steamboat packet business of the upper Mississippi and in 1866 had its office in a large shipyard in La Crosse. Commodore W. F. Davidson and his associates became dominant figures in the steamboat industry and in the economic life of the city. One of the earliest strikes on the Mississippi occurred when Commodore Davidson refused to raise the pay of his deckhands. He went to Cincinnati where he hired 400 newly liberated Negroes as strike breakers. Wages were reduced, and white deck-hands were no longer hired. Trade unionization, however, continued in other industries.

The first railroad bridge, erected in 1876, enabled trains to cross the Mississippi. New railroads came, and at the end of the 1870s, with five railroads radiating from it, La Crosse became the most important distribution point between St. Louis and St. Paul. With new markets available manufacturing increased and in 1877 La Crosse was the second most important manufacturing city in the State. Lumber and sawmill products, flour, cigars, foundry and machine shop products, agricultural machinery, furniture, sashes, doors, blinds, beer and malt products were the leading products. There were more than 20 wholesale houses for the distribution of drugs, furniture, dry goods and fruit. The rapid increase in trade and manufacturing was reflected in the population, which during the 1870s grew from 7,785 to 14,405.

La Crosse survived the shock of losing its foremost industry because other industries had developed with it. Four large breweries, which in 1884 manufactured more beer than those of any other city in the State, extensive plow works, furniture factories, agricultural implement factories, foundries, woolen mills, tanneries, a large pork packing plant, railroads ... all these, still expanding, helped absorb the unemployed.